His poetry and prose 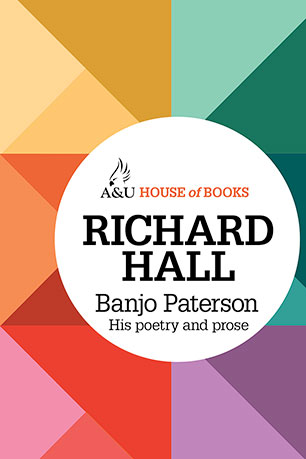 A new and lively selection of poetry and prose that brings together all the old classics along with the not-so-well-known and the off-beat.

Banjo Paterson's ballads are as fresh and alive today as they were one hundred years ago. This lively selection of poetry and prose brings together all the old classics along with the not-so-well-known and the off-beat: a prose account of an illegal dog fight in the Botany sandhills; bungling British officers at the Boer War, and Paterson addressing a barmaid in verse on the prospects - or otherwise - of 7/4 favourites.

Richard Hall's deeply researched introduction gives us a biographical picture of Paterson quite unlike that which some have tried to promote of a conservative squatter's mouthpiece. This Banjo is tough-minded and sceptical, and the modern reader will gain a new appreciation of some of Australia's favourite literature.

'.brings a new and fresh understanding of Banjo, the man. Tragic as it is that his great talents were never adequately rewarded financially, this very fact may have contributed to his earthiness and his empathy with the common man.' - John Tapp
More books by this author

Richard Hall worked as a journalist and in politics and has published books on historical/biographical topics, crime and espionage. He was also the writer of the Costello spy-thriller series. He passed away in 2003.

The Man from Snowy River

Clancy of the Overflow

In the Droving Days

Under the Shadow of Kiley's Hill

'He Giveth His Beloved Sleep'

The Daylight is Dying

Hay and Hell and Booligal

'When I went to the Bar'

A Dream of the Melbourne Cup

Old Pardon, the Son of Reprieve

The Oracle at the Races

Shakespeare on the Turf

El Mahdi to the Australian Troops

The Boss of the Admiral Lynch

A Trip with the Pearlers

With French to Kimberley

From the Boer Side: Interview with Olive Schreiner

A Day Under Fire: A Battlefield Sketch

The Pursuit of De Wet

An Informal Letter from London

The Ways of the Wild: The Dog-Poisoner

In Defence of the Bush

An Answer to 'Banjo' and Otherwise (Henry Lawson)

An Answer to Various Bards

The Man from Ironbark

The City of Dreadful Thirst

When Dacey Rode the Mule

Any Other Time - A Ballad of Good Excuses

Banjo Paterson tells his own Story