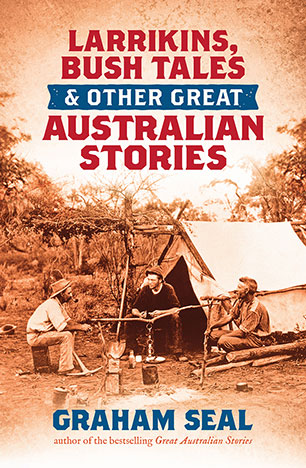 From one of our master storytellers, author of the bestselling Great Australian Stories, comes another collection of yarns, tall tales, bush legends and colourful characters. Taking us from the deep outback to the glistening sea, they go to the heart of what makes us distinctively Australian.

Yarns, legends, myths, jokes and anecdotes are our national lifeblood. The home-grown and borrowed tales, told and re-told over generations, offer an insight into the larger national story of which every Australian has a part.

Was Breaker Morant the Gatton murderer? What happened to Sniffling Jimmy and Black Mary? We revisit some of the most colourful characters in Australia's past, and the stories that have grown around them. We go looking for the real illywhacker and find out what happened after the execution of our most famous outlaw, Ned Kelly.

It takes a certain character to make a living in the Australian bush. In the most difficult situations, laughter often comes to the rescue. Here are pioneers and battlers, convicts and settler's children, and a land that tests them with fire, flood and drought, all in stories resonant with Australia's distinctive wry humour. Dip into Larrikins, Bush Tales and Other Great Australian Stories for a taste of Australia's rich history and traditions.
More books by this author

Graham Seal AM is Professor of Folklore at Curtin University, and a leading expert on traditional Australian culture. He is the author of many books about Australian history and culture, including the bestselling Great Australian Stories and Great Anzac Stories. His These Few Lines: The Lost Lives of Myra and William Sykes won the National Biography Award.

2 UPON THE FATAL SHORE

The melancholy death of Captain Logan

The Convict's Tour to Hell

'Make it hours instead of days'

Captain of the push

The Prince of Pickpockets

'I was not expected to survive'

The town that drowned

Phantoms of the landfall light

Who was Billy Barlow?

The temple of skulls

5 HOW WE TRAVEL THE LAND

The Tea and Sugar Train

The rise and fall of Cobb & Co.

Depending on the harvest

'Women of the West'

A seasonal guide to weather and wives

7 HOME OF THE WEIRD

Was Breaker Morant the Gatton murderer?

Lore of the track

'There you have the Australian swag'

Where the angel tarboys fly

Bowyang Bill and the cocky farmer

'I thought it was a circus'

A death in Forbes

10 THE CHILD IN THE BUSH

The beanstalk in the bush

The lost boys of Daylesford

Fairies in the paddock

The fate of Captain Cadell

12 WORKING FOR A LAUGH

Droving in a bar

A fine team of bullocks

Working on the railway

The laws of working life

Running naked with the bulls

The end of a perfect day

This book is very entertaining and holds the reader's attention as it gives an insight of how life used to be. It is an interesting style of book where the author gives some historical background prior to the yarn. This book is organised in sections relating to different topics so it doesn't have to be read from start to finish.

It would be suited to many Australian curriculum units such as First Contacts along with the unit Community and Remembrance as it gives indigenous, early explorer and settler perspectives. It would also suit geography studies as it relates to change over time. In literacy, this book would be useful as shared reading as well as analysis of poetry and verse. Some stories also relate to Indigenous perspectives of sustainability that can be useful in environmental studies. This book adds to who we are today as a nation and how we have evolved. As a multicultural society we are at risk of losing our 'bush tales'. It was a thorough enjoyable read.Michelle Hackett, Romsey Primary School VIC

What a fabulous resource for any coffee table or library! Graham Seal’s stories and narrative of Australia’s journey builds on previous work and puts a more serious slant on the yarns gathered earlier but such writers Bill Wannan. Since getting this book to review I have read it, browsed it and gone back to look for specific tales complementary to other subjects I am reading. Seal weaves an erudite study of various themes in Australia’s (written) history. The relaxing part of this book is that it reads as a series of yarns. It is friendly and approachable; entertaining and informative. It gives food for thought.
Stories covered are grouped into phases of Australia’s past; favourite or popular themes are quick to find and each contains a snippet or two of the unusual and the less well known.
For a general reader it is an asset for every class room. As an easy access afternoon reader for an interesting change of focus it is entertaining – and frequently a conversation starter. It provides a springboard into asking effective research questions and further inquiry. It should sell itself!
Michael Cruickshank, Hellyer College, TAS