My Twentieth Century Evening and Other Small Breakthroughs 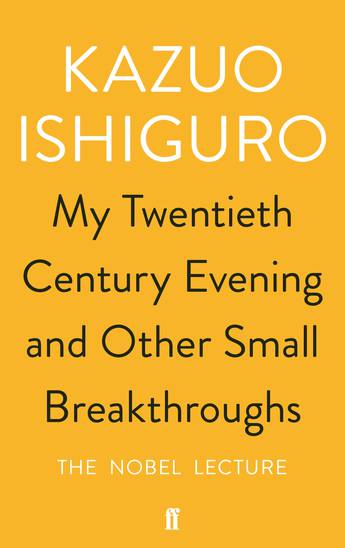 Delivered in Stockholm on 7 December 2017, My Twentieth Century Evening and Other Small Breakthroughs is the lecture of the Nobel Laureate in Literature, Kazuo Ishiguro.

A generous and hugely insightful biographical sketch, it explores his relationship with his homeland of Japan, reflections on his own novels and an insight into some of his inspirations, from the worlds of writing, music and film. Ending with a rallying call for the ongoing importance of literature in the world, it is a characteristically thoughtful and moving piece.
More books by this author

Kazuo Ishiguro's seven published books have won him wide renown and many honours around the world. His work has been translated into over forty languages. The Remains of the Day, which won the 1989 Booker Prize and Never Let Me Go have each sold in excess of 1,000,000 copies in Faber editions alone, and both were adapted into highly acclaimed films. His latest novel is The Buried Giant.

In October 2017 Ishiguro was awarded The Nobel Prize in Literature.