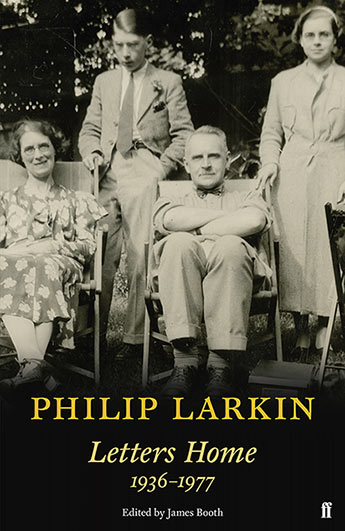 The last outstanding unpublished facet of Larkin's writing life: his correspondence 'home' to his father, mother and sister.

Letters Home gives access to the last major archive of Larkin's writing to remain unpublished: the letters to members of his family. These correspondences help tell the story of how Larkin came to be the writer and the man he was: to his father Sydney, a 'conservative anarchist' and admirer of Hitler, who died relatively early in Larkin's life; to his timid depressive mother Eva, who by contrast, lived long, and whose final years were shadowed by dementia; and to his sister Kitty, the sparse surviving fragment of whose correspondence with her brother gives an enigmatic glimpse of a complex and intimate relationship. But it was the years during which he and his sister looked after their mother in particular that shaped the writer we know so well: a number of poems written over this time are for her, and the mood of pain, shadow and despondency that characterises his later verse draws its strength from his experience of the long, lonely years of her senility. One surprising element in the volume, however, is the joie de vivre shown in the large number of witty and engaging drawings of himself and Eva, as 'Young Creature' and 'Old Creature', with which he enlivens his letters throughout the three decades of her widowhood.

This important edition, meticulously edited by Larkin's biographer, James Booth, is a key piece of scholarship that completes the portrait of this most cherished of English poets.
More books by this author

Philip Larkin was born in Coventry in 1922 and was educated at King Henry VIII School, Coventry, and St John's College, Oxford. As well as his volumes of poems, which include The Whitsun Weddings and High Windows, he wrote two novels, Jill and A Girl in Winter, and two books of collected journalism: All What Jazz: A Record Diary, and Required Writing: Miscellaneous Prose. He worked as a librarian at the University of Hull from 1955 until his death in 1985. He was the best-loved poet of his generation, and the recipient of innumerable honours, including the Queen's Gold Medal for Poetry, and the WH Smith Award.

James Booth edited Philip Larkin's early girls'-school stories and poems as Trouble at Willow Gables and Other Fiction and has published two critical studies of the poet's work: Philip Larkin: Writer (1991) and Philip Larkin: The Poet's Plight (2005). He is Literary Adviser to the Philip Larkin Society and Co-Editor of its journal, About Larkin. He recently retired from the Department of English at the University of Hull, where he had been a colleague of Larkin for seventeen years.