An A-Z of Charlotte, Emily and Anne Bronte (and Branwell) 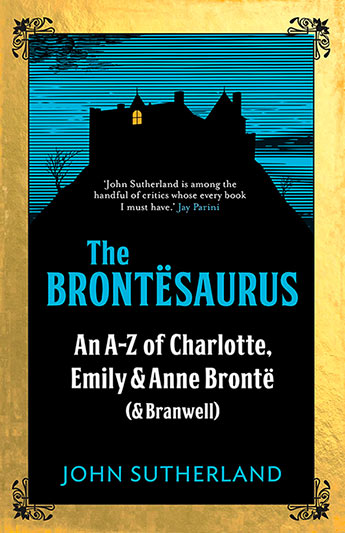 The essential miscellany for all Bronte fans.

Did Charlotte Bronte take opium? Did the Reverend Bronte carry a loaded pistol? What, precisely, does 'wuthering' mean?

Distinguished literary critic John Sutherland takes an idiosyncratic look at the world of the Brontes, from the bumps on Charlotte's head to the nefarious origins of Mr Rochester's fortune, by way of astral telephony, letterwriting dogs, an exploding peat bog, and much, much more. Also features 'Jane Eyre abbreviated' by John Crace, author of the Guardian's 'Digested Read' column - read Charlotte Bronte's masterpiece in five minutes!
More books by this author

John Sutherland is Lord Northcliffe Professor Emeritus at University College London and an eminent scholar in the field of Victorian fiction, author of many works including The Longman Companion to Victorian Fiction. He has also written the bestselling popular titles Is Heathcliff a Murderer? and Can Jane Eyre be Happy?, and such scholarly jeux d'esprit as Curiosities of Literature. His most recent books include How Good is Your Grammar?, Stars, Cars, and Crystal Meth and Orwella's Nose.

John Crace is the parliamentary sketch writer for the Guardian newspaper, for which he also writes the regular Digested Read feature. He is the author of several books including, with John Sutherland, the multi-volume The Incomplete Shakespeare.