A Harvest of Fear

A history of Australia's Vietnam War 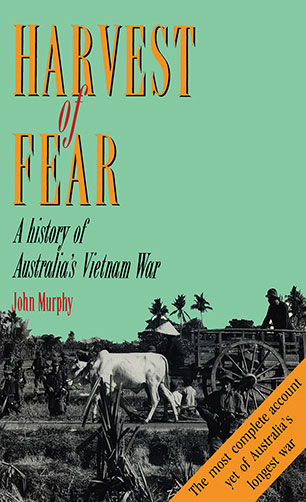 The Australian intervention in Vietnam remains Australia's longest and most contentious war. The war and its echoes are powerfully evoked in John Murphy's beautifully crafted story.

How did fears of the Cold War shape Australian images of Asia? What was the nature of the Vietnamese revolution, which some 50 000 Australian troops failed to reverse in the 1960s? How did a small and marginal peace movement grow into the powerful Moratorium and did it have any impact on the course of the War?

Harvest of Fear is a beautifully crafted history of Australia's experience of the Vietnam War. It draws together a picture of social and political life in colonial and postcolonial Vietnam; an incisive look at Australian Cold War politics and the diplomacy that led us to Vietnam; and a brilliant portrait of the origins and political impact of the powerful Australian anti-war movement. No previous book has pulled together these three critical strands of the Australian experience of the Vietnam War; it is indeed a broad and rich canvas.

Harvest of Fear presents the clearest picture yet of how the war came about, how it was seen from Australia, what the war in Phoc Tuy Province was like for the Australian soldiers sent there, and why our involvement was the cause of such division at home. Using a range of archival sources and interviews with participants, John Murphy shows how our intervention reflected the political alignments of Australia in the Cold War, as well as deeper and more troubled anxieties about Asia.

The Australian intervention in Vietnam remains Australia's longest and most contentious war. The war and its echoes are powerfully evoked in John Murphy's story.

Harvest of Fear is a book to appeal to everyone interested in Australian history and politics, and in Australia's involvement with Asia, especially with the Vietnam War.
More books by this author

Dr John Murphy has published articles on Australian history and social policy. He is a lecturer in politics and history at the Royal Melbourne Institute of Technology.

PART I: THE COLONIAL ORDER

1 Material life in the colonial world

3 'A trance of uncertainty, doubt and fear': Australia and Asia in the Cold War

Appendix: Opinion polls on the war and conscription