All Guts and No Glory

The story of a Long Tan warrior 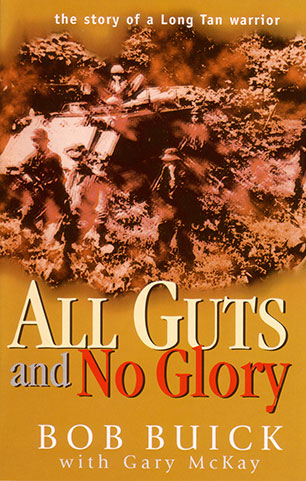 The climax of this book is an account of the Battle of Long Tan, which is told here by the most senior ranking Australian soldier to survive the battle.

Platoon Sergeant Bob Buick - decorated with the Military Medal for bravery for his actions during the Battle of Long Tan - tells in vivid and enthralling detail the story of his tour of Viet Nam. It culminates in the most famous battle involving Australian Diggers in the Viet Nam War, in which thirteen of Buick's men were killed and the remainder survived against overwhelming odds.

All Guts and No Glory is a no-pulled-punches account, covering all the major actions Buick's platoon encountered. It brings to life the frustrating, gut-wrenching and sorrowful experience of those who served as infantry warriors in Viet Nam, only to come home to an apathetic and sometimes hostile public. This is a poignant reminder of what combat, infantry soldiering and the Viet Nam war was all about. All Guts and No Glory also debunks the myths, lies and legends of the Long Tan Battle.

Bob Buick has collaborated with one of Australia's best-known authors of the Viet Nam era, Gary McKay, MC, himself a Viet Nam veteran and infantryman, to write this first-hand description of the Long Tan Battle and other operations against the Viet Cong and the North Vietnamese Army.

'This extraordinary depiction of service in Viet Nam points to the real need for comprehensive writings on the wartime service of Australians, even decades after the event. All Guts and No Glory is a soldier's account of the battle of Long Tan and the Viet Nam War, detailed and captivating right through to the return to Australia on the Vung Tau Ferry. It adds greatly to the records relating to this difficult, but important part of Australia's 20th century military heritage.' - Hon Tim Fischer MP
More books by this author

2 Background to the war

7 The Battle of Long Tan

8 The charnel house - clearing the battlefield