Backs to the Wall

A larrikin on the Western Front 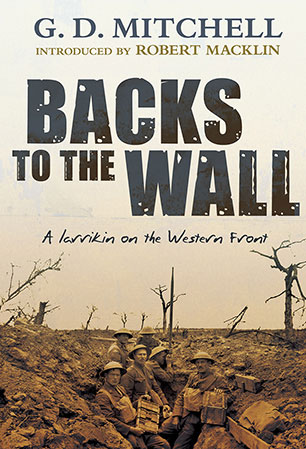 Originally published in 1937 (and long out of print), this is a gripping, first hand account of a young soldier's experiences in France and Belgium during the First World War.

'In that hour was born in me a fear that lasted throughout the whole winter. It was the dread of dying in the mud, going down in that stinking morass and though dead being conscious throughout the ages. Waves of fear at times threatened to overwhelm me. a little weakness, a little slackening of control at times and I might have gone over the borderline.

In the light of the sun, on firm ground, I could laugh at fate. But where the churned mud half hid and half revealed bodies, where dead hands reached out of the morass, seeming to implore aid - there I had to hold tight.'

In this gripping account, George Deane Mitchell relives the horror and the humour of being an Australian soldier on the Western Front in World War I. Backs to the Wall by was originally published in 1937. This new edition - with commentary by Robert Macklin, author of Jacka VC - will allow a new generation of readers to fall under the spell of this forgotten Australian classic.
More books by this author

G. D. MITCHELL was born in Caltowie, SA in 1894 and enlisted in the AIF in 1914 as a 20-year-old. He fought at Gallipoli and on the Western Front, winning the Military Cross. In World War II he fought in New Guinea. Backs to the Wall written in the 1930s, is based on his war-time diaries. He died in 1961. ROBERT MACKLIN is a professional writer living in Canberra. He has written Fire in the Blood and Jacka for Allen and Unwin, and co-authored The Man Who Died Twice for Allen and Unwin.