An Australian SAS soldier in Vietnam 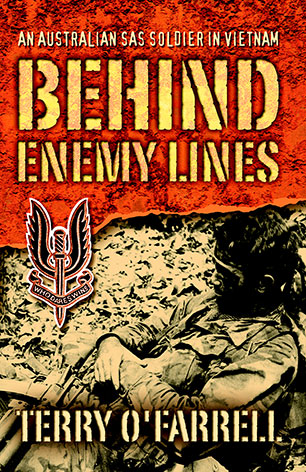 A compelling personal account of a young SAS soldier's experiences in Vietnam.

Another urging hiss from behind me-okay hold onto your horses, I'm going. Five to ten paces takes me over the track, and now I scan the creek ahead trying to peer through the underbrush, to detect signs of enemy presence. Jesus, it's quiet; unnaturally quiet.another obviously more urgent hiss is sent out to attract my attention. Looking back over my shoulder I see the enemy soldier immediately; he is on the track looking directly at me.apparently oblivious to my presence. Has he seen me? screams through my brain. No!. Suddenly, the bastard takes off like a startled jackrabbit. Couldn't hold it together any longer, I think, as I try to get a shot in-but it's hopeless, no point in firing.in any case the remainder of the patrol is now thundering towards me.

With his remarkably observant eye, Terry O'Farrell's personal account of his career as an SAS soldier vividly captures not only the military actions of his time in Vietnam, but the human aspects of soldiering-from surviving the intense selection process and training, to dealing with the ever-present fear of combat.

Terry relives the long tense stretches on patrol in the jungle, ears ever alert to the sounds of the surrounding terrain and being caught by surprise and sudden contact with the enemy. He also entertains his readers with colourful tales of his experiences off the battlefield-the larrakin pranks during training, visits to Mama San and her girls, and the friendship and mutual trust that forms between soldiers.

An absorbing, frank and humorous reflection, Behind Enemy Lines is a first-hand insight into the mind of a young SAS soldier.

'Captures the true day to day existence of an Infantry solider.I had tears rolling down my face at some of the shenanigans.to being brought back to the nasty reality that was the war we all knew. The humour when setting up either a fellow soldier or an instructor and suffering the consequences or feeling Oh so smug when you got away with it makes for great reading.' - Bill McLaughlin
More books by this author

Terry O'Farrell enlisted in the Australian Army when the war in Viet Nam started gathering momentum. He completed two combat tours of Viet Nam as an SAS soldier and went on 40 patrols behind enemy lines as a forward scout, a patrol signaller and eventually as a patrol commander, and was wounded twice. Following Vietnam he remained in the Army rising through the ranks to Major. Terry now lives in Perth with his wife and four children.

8 Cobras and the Don Khanh Hotel

13 Action on the Firestone Trail

19 The May Tao Mountains