The Australian Submarine at Gallipoli 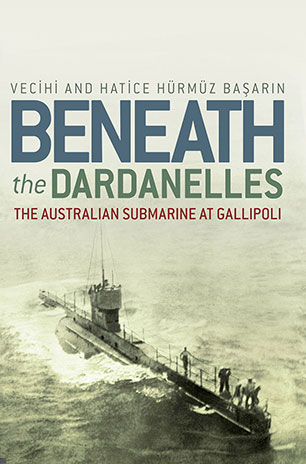 AE2's daring passage through the Dardanelles on 25 April 1915 is a success story of the Gallipoli campaign. Ordered to run amuck', for five days AE2 avoided capture before being scuttled after a skirmish with the Turkish torpedo boat Sultanhisar. This book is based on the memoirs of the captains of AE2 and Sultanhisar.

The AE2 achieved a daring passage through the Dardanelles on 25 April 1915 when Anzac troops were landing on the other side at Anzac Cove. The Royal and French navies' previous attempts at passage had ended in disaster. AE2's mission to 'run amuck' ended after five days in the Sea of Marmara when it was caught by the Turkish Sultanhisar torpedo boat. After being holed, AE2's captain Stoker scuttled the submarine and its crew were saved by Sultanhisar's captain, Ali Riza.

Beneath the Dardanelles tells AE2's story from both the Australian and Turkish perspectives, and features extracts from the memoirs of the two captains. Rarely in military books are both sides of a battle presented so evenly.

The submarine lay undiscovered on the bottom of the sea until 1998 and awaits its destiny as the largest historical Australian relic of the Gallipoli campaign. The future of AE2 will be newsworthy for years to come and this book makes an important contribution to that story.
More books by this author

Vecihi Basarin is a retired Chemical Engineer who worked in the private and public sectors in the offshore oil and gas, industry assistance, petroleum, petrochemical, investment attraction, tourism and environmental protection related fields in Turkey, Norway, USA, Brazil, Germany and the UK. Hatice Basarin is a town planner who came to Australia in 1979. After receiving a Master of Urban Planning degree from the University of Melbourne, she has worked as a policy and research officer on land use planning, local government and public housing issues. Their first book Gallipoli: The Turkish Story was published by Allen + Unwin in 2003. They live in Melbourne.