Chased by the Sun

The Australians in Bomber Command in World War II 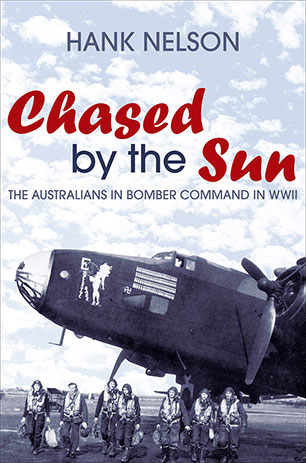 The remarkable story of the more than 4000 Australian airmen who died over the skies of Europe whilst serving with the British Bomber Command in World War II.

The glow of the sun was frightening and it chased them home . . .

Bill Brill began losing height to escape the sky growing lighter above and behind him. But the sun was faster than the Wellington. By the time he crossed the west coast of Denmark he was down to 400 feet. The sun chased him across the North Sea and the East Riding of Yorkshire to Breighton. Ten per cent of the bombers were lost on the Warnemunde raid.

The Australians who served in Bomber Command were highly trained members of an elite corps. They were thrown into a war of repeated bombing raids in which they had to perform complex tasks under extreme pressure and danger. They flew mission after mission with full knowledge that the odds of survival were against them - 4000 Australians died in Bomber Command - but they pressed on regardless.

Many of the Australian airmen who were killed in the air over Dusseldorf or Essen are now unremembered in their homeland, but their lonely bravery contributed to the defeat of the Nazi regime. Hank Nelson vividly brings to life through his lively writing and his extensive use of personal reminiscences the extraordinary experiences of the Australians who served with the British bomber squadrons. He depicts their fears, despair and courage in the face of the most terrible experiences.
More books by this author

After graduating from Melbourne University, Hank Nelson taught in high schools and at RMIT before being appointed to the Administrative College and the University of Papua New Guinea in Port Moresby. Since returning to Australia he has been at the Australian National University where he is now Professor Emeritus in Pacific and Asian History. His previous books have included Papua New Guinea, Black White + Gold, Taim Bilong Masta, Prisoners of War, and With its Hat about its Ears. He has also been involved in film and radio documentaries.

1 Something with a bit more future

3 Many ways to war

5 Just what I need: A wireless op who drinks

7 The supreme nonchalance of the young

9 Canoodling on a little stone bridge

10 Going for a Burton

13 Bags of swank and the good gen