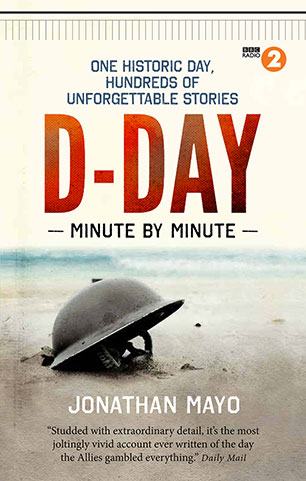 This is the story of D-Day as seen through the eyes of the people who were there - from soldiers, French villagers and journalists, to schoolchildren and nurses, who found themselves placed in often extraordinary situations on that historic day in June 1944.

Take French Resistance member Andre Heintz and his sister, who have to spread out bloody sheets in the shape of a giant red cross to protect a hospital from bombers; Rosemary Geddes at an RAF listening post, hearing transmissions between German gunners falling silent one by one; Red Cross volunteer Naina Cox, helping injured German POWs in Portsmouth on the afternoon of the invasion; a soldier of the Royal Corps of Signals, discovering his landing craft is carrying a box of white wooden crosses; or Commando Peter Masters, walking all alone towards a German machine gun shouting, 'You are totally surrounded! Give yourselves up!' - copying something he'd seen in a war film.

D-Day: Minute by Minute is pure chronological narrative, giving an account of events that is both intimate and epic.
More books by this author

Jonathan Mayo joined the BBC in 1987, first working in radio and then television, where he won awards for his documentaries. In 2012 he became a freelance producer, director and writer. He is the author of three Minute by Minute books, including The Assassination of JFK (Short Books, 2013) and Hitler's Last Day (2015, co-authored by Emma Craigie). He lives in Surrey with his wife and son.