Australians at war from Beersheba to Tobruk and El Alamein 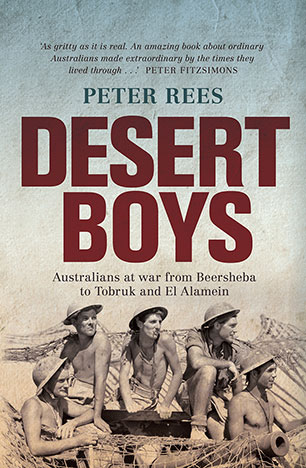 Australians fought in the deserts of North Africa and the Middle East in both World Wars. This is the very human story of those soldiers, sailors and airmen and their involvement in some of the toughest campaigns of modern times, and their life away from the battlefield.

'As gritty as it is real. An amazing book about ordinary Australians made extraordinary by the times they lived through . . .' - Peter FitzSimons

'.moves the reader with its intimacy, passion and attention to detail.' - Herald Sun

'A fine addition to the military bookshelf.' - Courier Mail

About 1300 Australians died in the desert campaigns of World War I, while another 3500 died in North Africa and the Middle East during World War II. Thousands more carried the wounds of war for the rest of their lives. Countless families were left behind to mourn the dead and comfort the injured. A ripple effect of grief passed down the generations.

This is the story of Australia's desert wars as never before told. Using letters, diaries, interviews and unpublished memoirs, Desert Boys provides an intensely personal and gripping insight into the thoughts, feelings and experiences of two generations of Australian soldiers. In many cases these were fathers and sons going to successive wars with all the tragedy, adventure and hardship that brought.

Desert Boys is a powerful and absorbing story of bravery and hope, of endurance and determination, of mateship and adversity a very long way from home.

Peter Rees has been a journalist for more than forty years, working as federal political correspondent for the Melbourne Sun, the West Australian and the Sunday Telegraph. He is the author of The Boy from Boree Creek: The Tim Fischer Story (2001), Tim Fischer's Outback Heroes (2002), Killing Juanita: a true story of murder and corruption (2004), and The Other Anzacs: The extraordinary story of our World War I nurses (2008 and 2009). He lives in Canberra.