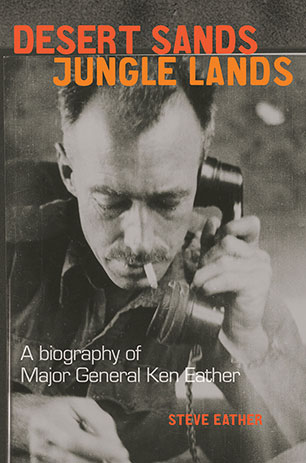 Ken Eather was one of Australia's foremost soldiers. Serving in the pre-WW2 militia he was one of the first officers appointed to the AIF. He led a unit in the key initial assault at Bardia, the Australian army's first major battle of World War 2. After further service in North Africa and Syria he returned to Australia as a brigadier and was one of the senior officers serving on the Kokoda Trail. After further action he was given command of the 11th Division and led the Australian contingent at the 1946 Victory Parade in London.

Ken Eather was born in 1901 and after an unremarkable childhood he left school at the age of 14 to become an apprentice dental mechanic. As boys from the age of 12 had to join Army cadet units, young Ken had an early taste of soldiering. Graduating from cadets when he turned 18 he was transferred into the conscript Militia (today s Army Reserve) where he became noted as a keen and able soldier. At a time when commissions were largely offered to World War I veterans Eather turned heads when he was commissioned at an early age.

When war was declared in 1939, Eather was just the third soldier enlisted into the AIF from New South Wales. He formed the 2/1st Battalion of the AIF and later led it with considerable distinction in the AIFs first major battle of World War II Bardia. He later fought in the battle to capture Tobruk. Promoted to Brigadier he was given command of the 25th Brigade and soon led that formation in the critical and highly contentions actions at Ioribaiwa and Imita Ridge before Port Moresby. His troops later spearheaded the re-capture of the Kokoda Trail before participating in the bitter fighting at Gona.

On 9 May 1993 at the age of 92 Major General K.W. Eather died and was buried with full military honours in Sydney. He was Australia s last remaining World War II general.
More books by this author

Steve Eather applied to join the RAAF the day he turned seventeen, and served for sixteen years, including seven years with the F-111 strike force. He played a pivotal role in the redevelopment of the RAAF Museum, now the foremost aviation museum in Australia. This is his seventh book.

4 Syria: A promotion and a homecoming

5 Imita Ridge and the last line of defence

6 Taking the offensive on the Kokoda Track

7 Gona: A fight to the last man

10 Overlord of a Japanese bastion

11 A celebration of victory

12 Farewell to all that