Fire in the Sky

The Australian Flying Corps in the First World War 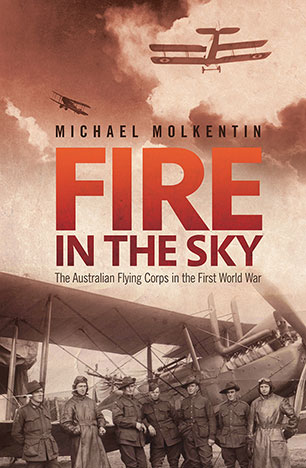 The first book in 90 years dedicated to the daring and courage of the airmen and mechanics of the Australian Flying Corps - a tale of a war fought thousands of feet above the trenches from which only one in two emerged unscathed.

'I half rolled, and there before my eyes was as perfect a target as I had ever seen in my life. A pressure of a thumb, a short burst, a puff of smoke, a flash of flame, a hole on the clouds-and it was over.'

When the First World War began in August 1914, aeroplanes were a novelty, barely a decade old. Despite this, Australia was one of just a few nations outside Europe to establish a military flying school and corps. From a first class of four student pilots the Australian Flying Corps would grow to number almost 4000 by the armistice. Its young volunteers were pioneers in a completely new dimension of warfare as they struggled for control of the skies over the Western Front and Middle East.

Using private letters, diaries and official records, historian Michael Molkentin reveals, for the first time in over 90 years, the remarkable story of the airmen and mechanics of the Australian Flying Corps. It is a tale of heroism and endurance; of a war fought thousands of feet above the trenches in aircraft of timber and fabric. Fire in the Sky takes readers up into this chaotic tumult and into the midst of a war from which only one in two Australian airmen emerged unscathed.
More books by this author

Michael Molkentin is a prize-winning historian, teacher and battlefield tour guide. He has a degree in History from the University of Wollongong.