A Doctor in the Trenches 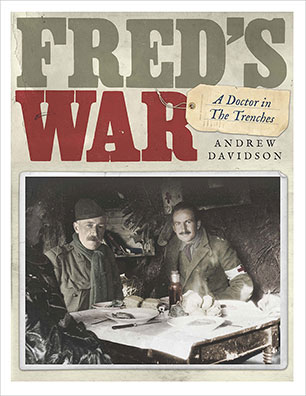 The extraordinary story of a young doctor who in 1914 illegally took his camera to war.

Fred Davidson embarked for France from Southampton at 10pm on the warm night of 15 August 1914. He was 25, a minister's son from Montrose, newly qualified in medicine, newly trained in the Royal Army Medical Corps, and newly acquainted with his fellow officers in the 1st Battalion, Cameronians. For the next nine months he and his comrades fought through France and Belgium - driven back at Mons, pushing through the Marne, entrenching around Armentieres. And with him Davidson took his folding camera, sharing his love of photography with fellow officers who also, clandestinely, took pictures of life in the front line.

This book shows his remarkable photographs for the first time. His grandson Andrew Davidson pieces together the stories behind the pictures that have passed through his family for three generations - the men who fought with Fred, the conditions they served in, the battles they fought and the horrors they saw. It offers an unusually intimate portrait of life among a band of brothers. It also examines just how ill-prepared Army doctors were for the carnage they faced, and asks, how did they cope? Fred Davidson received the Military Cross for gallantry in January 1915, one of the first doctors to receive the award. He was wounded two months later and shipped back to Britain. He returned as head of the 74th Field Ambulance in France in 1917, but by then he had stopped taking photographs.
More books by this author

Andrew Davidson is an award-winning journalist; he was the author of The Sunday Times Business interview page from 2003 to 2012. He has always wanted to write this book.