A Collective Diary from Hitler's Last Birthday to VE Day 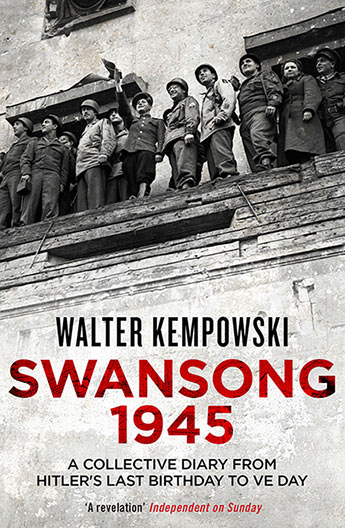 A monumental work of history which brings to life four final days of World War II through letters, diaries, and eyewitness accounts.

Swansong 1945 brings together hundreds of letters, diary extracts and autobiographical accounts to chronicle four significant days in the last three weeks of WWII: 20 April, Hitler's last birthday; 25 April, when American and Soviet troops first met at the Elbe; 30 April, the day Hitler committed suicide; and 8 May, the day of the German surrender. Side by side in these pages, we encounter the voices of civilians fleeing on foot to the west, British and American POWs dreaming of home, concentration camp survivors, loyal soldiers from both sides of the conflict and national leaders including Churchill, Hitler and Mussolini.

These first-hand accounts, which Walter Kempowski painstakingly collected, organised and shaped for publication over twenty years, provide the raw material of history unmediated by a historian's narrative. The voices of individuals speak for themselves, and through their many experiences, perspectives and situations, the condition of Europe during the final weeks of WWII is viscerally recreated.
More books by this author

WALTER KEMPOWSKI (1929-2007) was one of Germany's most important post-war writers. In the 1980s he began work on Echo Soundings [Das Echolot], gathering together first hand accounts of the second world war, which he curated into ten volumes published over 20 years, and which is considered a modern classic. Swansong 1945, published in Germany in 2005, is the final volume of that work.