An illustrated history of the 9th Australian Division 1940-46 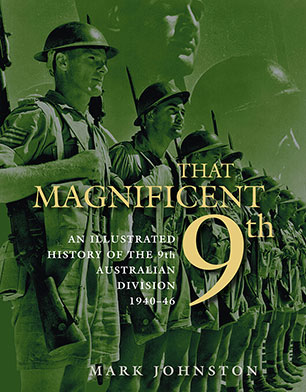 A comprehensive illustrated history of the Australian 9th Division during WWII.

This is a unique and powerful visual history of the men who fought in the 9th Division, the most famous Australian division of World War II. Many never before published photographs, some from veterans' private collections, illustrate dramatic and moving stories of Tobruk, El Alamein, New Guinea and Borneo.

The 9th Division gained renown as 'Rats of Tobruk' in 1941, were eulogised as 'that magnificent 9th' by General Montgomery after the battle of El Alamein in 1942, and drew praise from their formidable opponent, Field Marshal Rommel. On the eve of the D-day landing in Normandy, Montgomery's chief-of-staff said, 'My God, I wish we had 9th Australian Division with us this morning, don't you?'

In 1943, the Division joined the war against Japan. It served with distinction in New Guinea - undertaking the largest amphibious landing by Australian forces since Gallipoli - and in two controversial campaigns in Borneo.

That Magnificent 9th is much more than a collection of fine photographs. Together with expert commentary on the illustrations, it provides the first narrative history of the Division's entire wartime experience. It also presents, for the first time, detailed tables showing the 9th's commanders, casualties and awards for bravery.
More books by this author

Dr Mark Johnston has written five books and numerous articles on Australian soldiers in World War II. He regularly delivers talks on Australians at war, and maintains contact with many veterans. He is Head of History at Scotch College, Melbourne.