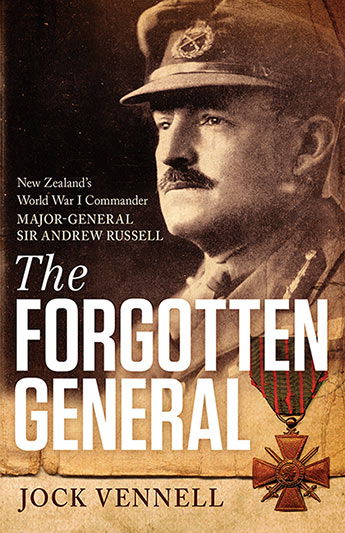 The biography of one of New Zealand's greatest military leaders, whose story has remained untold until now.

The Forgotten General highlights the courage, intelligence and determination of an exceptional New Zealander. Major-General Sir Andrew Russell was a distinguished soldier and a dedicated leader of men. He was among the top-ranked divisional commanders in the British armies that fought on the Western Front in World War I. He has been described as 'the one military commander of genius that New Zealand produced in the twentieth century. Yet little of his story is known.

Born into pioneer farming stock, Russell's early days were spent on sheep stations in the Hawke's Bay region; he was educated at Harrow and at the Royal Military College, Sandhurst, and later served in the British Army in India and Burma. When World War I broke out, Russell commanded the New Zealand brigade that served with distinction at Gallipoli. He was subsequently knighted and given command of the 20,000-strong New Zealand Division that under his leadership became one of the finest fighting formations on the Western Front.

The Forgotten General, however, is not just about a consummate military commander. It also tells the story of the men he led through four unbroken years of war-starting with the raw and inexperienced brigade that arrived on Gallipoli in May 1915 and finishing with the lite division at the spearhead of the British counter-offensive that finally ended the war on the Western Front.
More books by this author

Jock Vennell is a historian by training, a former newspaper, radio and magazine journalist, and public affairs executive with the Ministry of Defence. For six years he edited New Zealand Defence Quarterly, and in this role first encountered Major-General Sir Andrew Russell.