Tunnel Rats vs the Taliban

How Aussie sappers led the way in the war on terror 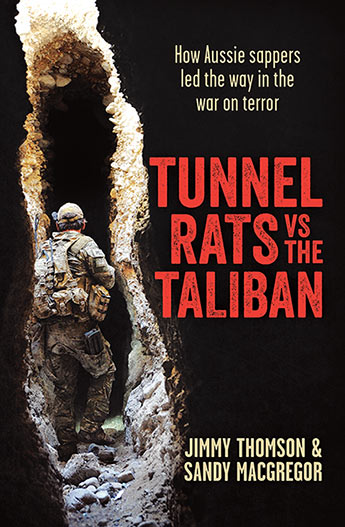 The extraordinary story of Australian sappers on the frontlines of the war in Afghanistan.

They were young, they were tough and they were everywhere. They were both the backyard builders and the frontline troops in Australia's war against the Taliban.

This is the powerful story of the sappers, the Army engineers in Afghanistan whose raw courage and skills were inspired by the original Australian Tunnel Rats of the war in Vietnam. These Tunnel Rats of Afghanistan have rooted out the enemy from deep inside their caves and mountain hideouts, have defused thousands of improvised explosive devices (the booby traps and landmines of this most recent of wars), built bridges and schools to win a war of hearts and minds, and fought side by side with special forces commandos and SAS troops. They, too, lost a disproportionate number of their comrades and many returned home with the devastating baggage of war, post-traumatic stress disorder.

Inspiring and action packed, this is the story of a special breed of soldier operating in a modern war against an enemy with medieval morals . . . and bombs triggered by mobile phones. It is a story that connects the unsung heroes of Vietnam with the modern heroes of Afghanistan.

JIMMY THOMSON is a journalist, author and screenwriter. He is the author of Snitch, Watto and Wendell Sailor: Crossing the line, and co-wrote Tunnel Rats and A Sappers' War with Sandy MacGregor. As a young captain SANDY MACGREGOR, a graduate of the Royal Military College, Duntroon, commanded the original Tunnel Rats of 3 Field Troop in Vietnam and was awarded the Military Cross. He served in the Army for 30 years, finishing as a colonel in the Reserves.

2: The rise of the Taliban

9: On patrol with special forces

12: Taking on a tech killer

21: Life and death with special forces