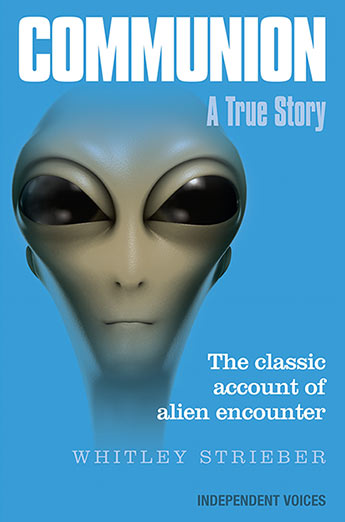 This UFO classic and the basis for the cult film starring Christopher Walken, Communion is one of the most thought-provoking books of the twentieth-century.

On December 26th 1985 Whitley Strieber was woken in his isolated cabin in upstate New York, he saw a creature in his bedroom. His next memory is sitting in the woods around the cabin. Hypnosis revealed that Whitley Strieber had been abducted by a UFO and that he had been subjected to medical testing by aliens. Strieber came to realise that he had been abducted by these alien life forms for most of his life, and began to record his experiences with visitors from 'elsewhere'.

Whether the reader believes or not his story it will fascinate and terrify. The sincerity and detail of Strieber's account of his experiences is powerful and it will force every reader to ask: what are the aliens trying to communicate, are they here to guide and transform mankind, has the greatest mystery of our time been solved? Is Whitley Strieber an ambassador for beings from another world to contact mankind?
More books by this author

Whitley Strieber was a successful horror writer before publishing Communion in 1987, and it became a major international bestseller. Strieber is the host of the online radio show 'Dreamland', which covers paranormal phenomena.