The Story of Can 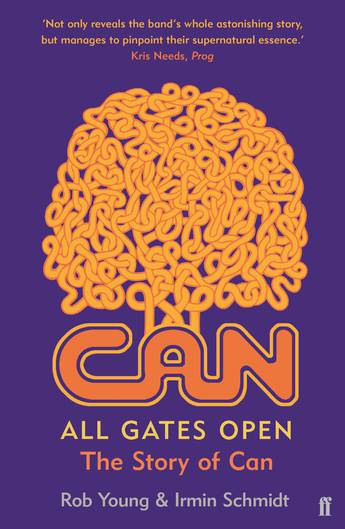 All Gates Open presents the definitive story of arguably the most influential and revered avant-garde band of the late twentieth century: CAN. It consists of two books.

In Book One, Rob Young gives us the full biography of a band that emerged at the vanguard of what would come to be called the Krautrock scene in late sixties Cologne. With Irmin Schmidt and Holger Czukay - two classically trained students of Stockhausen - at the heart of the band, CAN's studio and live performances burned an incendiary trail through the decade that followed: and left a legacy that is still reverberating today in hip hop, post rock, ambient, and countless other genres. Rob Young's account draws on unique interviews with all founding members of CAN, as well as their vocalists, friends and music industry associates. And he revisits the music, which is still deliriously innovative and unclassifiable more than four decades on. All Gates Open is a portrait of a group who worked with visionary intensity and belief, outside the system and inside their own inner space.

Book Two, Can Kiosk, has been assembled by Irmin Schmidt, founding member and guiding spirit of the band, as a 'collage - a technique long associated with CAN's approach to recording. There is an oral history of the band drawing on interviews that Irmin made with musicians who see CAN as an influence - such as Bobby Gillespie, Geoff Barrow, Daniel Miller, and many others. There are also interviews with artists and filmmakers like Wim Wenders and John Malkovitch, where Schmidt reflects on more personal matters and his work with film. Extracts of Schmidt's notebook and diaries from 2013-14 are also reproduced as a reflection on the creative process, and the memories, dreams, and epiphanies it entails. Can Kiosk offers further perspectives on a band that have inspired several generations of musicians and filmmakers in the voices of the artists themselves.

CAN were unique, and their legacy is articulated in two books in this volume with the depth, rigour, originality, and intensity associated with the band itself. It is illustrated throughout with previously unseen art, photographs, and ephemera from the band's archive.
More books by this author

Irmin Schmidt, pupil of the likes of Stockhausen and Ligeti, decided in the late 1960s - after an extensive classical education as pianist, conductor, and composer - to combine classic New Music with Rock and Jazz: and founded the band CAN. After CAN, Irmin Schmidt returned to his work as a solo-artist. The result is a vast oeuvre which includes a series of solo albums, an opera (Gormenghast based on the Mervyn Peak trilogy), a ballet, and over 100 film scores In 2015, he was made a Chevalier of the French Ordre des Arts et des Lettres. He lives in southern France.

Rob Young has worked at The Wire magazine since 1993, including five years as editor. He is the author of Rough Trade, Warp and the acclaimed Electric Eden, and the editor of Undercurrents: The Hidden Wiring of Modern Music and The Wire Primers: A Guide to Modern Music. He has contributed to publications including Uncut, the Guardian, Sight & Sound, Frieze, and Art Review. He lives in Oslo with his family.