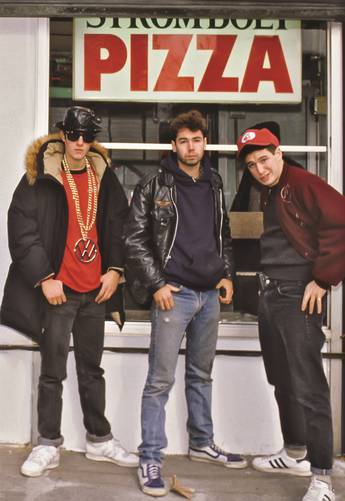 A panoramic experience that tells the story of Beastie Boys, a book as unique as the band itself - by band members AD-ROCK and Mike D, with contributions from Amy Poehler, Colson Whitehead, Spike Jonze, Wes Anderson, Luc Sante, and more.

Formed as a New York City hardcore band in 1981, Beastie Boys struck an unlikely path to global hip-hop superstardom. Here is that story, told for the first time in the words of the band.

Adam 'Ad-Rock' Horovitz and Michael 'Mike D' Diamond offer revealing accounts of their transition from teenage punk musicians to budding rappers; their early collaboration with Russell Simmons and Rick Rubin; the almost impossible-to-fathom overnight success of their debut album 'Licensed to Ill' featuring the mega-hit 'Fight for your Right (To Party)'; the album's messy fallout and how it led the band to 'become what we hated'; their break with Def Jam, move to Los Angeles, and initial commercial failure of what was later recognised as a genre-defining masterpiece, 'Paul's Boutique'; their growing social activism and influence on the culture throughout the next twenty years; and, above all, the legacy of founding co-member Adam 'MCA' Yauch, who passed away in 2012.

With a style as distinctive and eclectic as a Beastie Boys album, this book also includes wide-ranging contributions from famous writers and cultural figures like Colson Whitehead, Jonathan Lethem, Spike Jonze, Amy Poelher, and Wes Anderson. Running throughout are a plethora of colour photos and illustrations of 'everything from us to the Knicks to drum machines to people's business cards to the Swiss Appenzell,' as well as a graphic novel, a cookbook, mixtape playlists, a fake snobby music magazine, and much more.
More books by this author More books in this series

BEASTIE BOYS is a trio consisting of Michael ‘Mike D’ Diamond, Adam ‘Ad Rock’ Horovitz, and Adam ‘MCA’ Yauch (1964-2012). Formed in 1981 as part of New York's hardcore punk underground, the group's first full-length album, Licensed to Ill, was the first rap album to reach Number One. With seven platinum or better albums from 1986 to 2004, including Licensed to Ill, Paul's Boutique, Check Your Head, Ill Communication, Hello Nasty, and To the Five Boroughs, Beastie Boys are one of the longest-lived hip hop acts worldwide. They were inducted into the Rock and Roll Hall of Fame in 2012.