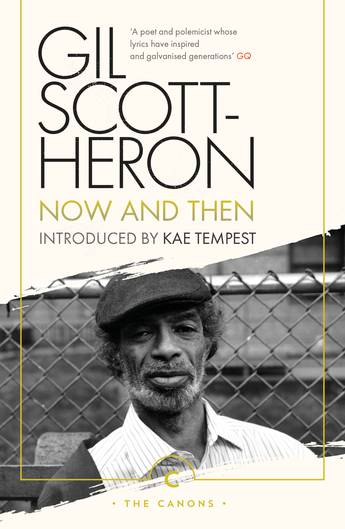 'A poet and polemicist whose lyrics have inspired and galvanised generations.' - GQ. Introduced by Kate Tempest.

Now And Then is not merely a collection of a songwriter's lyrics; the song-poems of this undisputed 'bluesologist' triumphantly stand on their own, evoking the rhythm and urgency which have distinguished Gil Scott-Heron's career.

This collection of poems carries the reader from the global topics of political hypocrisy and the dangers posed by capitalist culture to painfully personal themes and the realities of everyday life. His message is black, political, historically accurate, urgent, uncompromising and mature and as relevant now as ever.
More books by this author More books in this series

Gil Scott-Heron was born in Chicago in 1949. A highly influential and widely admired singer, proto-rapper, jazz pianist, published poet, novelist and socio-political commentator, Scott-Heron was a unique and major figure in global music. With over fifteen albums to his name, his politically charged output has won him an international following. His work illuminates a philosophy of life that held human affection as well as political and artistic responsibility as the underlying factors that inspired his writing. Gil Scott-Heron spent more than thirty years opening eyes, minds and souls. He died in 2011.