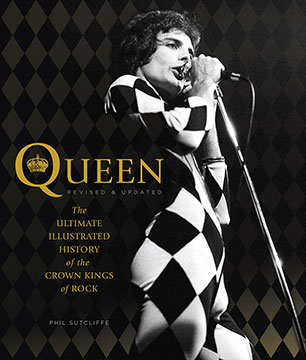 The first-ever complete illustrated history of rock 'n' roll's most dynamic band--Queen. Get a close-up view of the music and the men behind it.

They were renowned for stunning live performances, envied for rumors of their rock 'n' roll excess, and beloved for their occasionally anthemic and always virtuosic music. Nearly twenty years after the death of their engaging and supremely talented front man, Queen remains the archetypal larger-than-life rock band, comfortably enthroned among rock royalty. Now, to celebrate the majesty of Queen's contributions to rock, here's the first-ever complete illustrated history of the band.

With glorious concert and candid off-stage photography from throughout the band's career, as well as concert posters, backstage passes, LPs and singles, and other memorabilia from throughout the world, this is the ultimate visual tribute to Queen. More than 500 photos and artifacts are accompanied by contributions from some of today's top rock journalists from Europe and North America. In addition to a chronological history of the band, there are reviews of all studio albums, notable excerpts from period publications, complete year-by-year tour dates, and a discography, as well as reflections on the band and their music from many of rock's top performers past and present, including Slash, Tommy Lee, and Billy Squier.

Freddie Mercury, Brian May, Roger Taylor, and John Deacon combined a dizzying array of influences and genres in creating what would become one of the most compelling catalogs and lasting legacies in rock. This book dares to match that bombast.
More books by this author

London-based journalist Phil Sutcliffe has been writing about rock since 1974 and has interviewed greats such as Paul McCartney, Bruce Springsteen, Nirvana, and Queen. Phil is also the author of Voyageur Press' AC/DC: High-Voltage Rock 'n' Roll: The Ultimate Illustrated History.