Searching in the Sun for the World's Greatest Unfinished Song 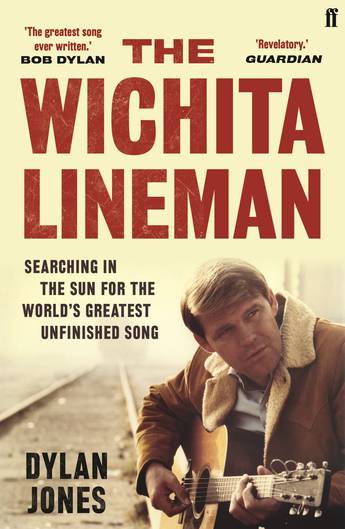 The sound of 'Wichita Lineman' was the sound of ecstatic solitude, but then its hero was the quintessential loner. What a great metaphor he was: a man who needed a woman more than he actually wanted her.

Written in 1968 by Jimmy Webb, 'Wichita Lineman' is the first philosophical country song: a heartbreaking torch ballad still celebrated for its mercurial songwriting genius fifty years later. It was recorded by Glen Campbell in LA with a legendary group of musicians known as 'the Wrecking Crew', and something about the song's enigmatic mood seemed to capture the tensions in America at a moment of crisis. Fusing a dribble of bass, searing strings, tremolo guitar and Campbell's plaintive vocals, Webb's paean to the American West describes a telephone lineman's longing for an absent lover, who he hears 'singing in the wire' - and like all good love songs, it's an SOS from the heart.

Mixing close-listening, interviews and travelogue, Dylan Jones explores the legacy of a record that has entertained and haunted millions for over half a century. What is it about this song that continues to seduce listeners, and how did the parallel stories of Campbell and Webb - songwriters and recording artists from different ends of the spectrum - unfold in the decades following? Part biography, part work of musicological archaeology, The Wichita Lineman opens a window on to America in the late-twentieth century through the prism of a song that has been covered by myriad artists in the intervening decades.

'Americana in the truest sense: evocative and real.' - Bob Stanley

'When I heard it I cried. It made me cry because I was homesick. It's just a masterfully written song.' - Glen Campbell

'I love the song because its as though it's been in my life forever.' - Amy Raphael

'It's not just the perfect pop song, it's almost perfect as an idea, existing outside of the song itself.' - Stuart Maconie

'I don't really think of 'Wichita Lineman' as easy listening, I just think it's a great song.' - Paul Weller
More books by this author

Dylan Jones studied at Chelsea School of Art and St. Martin's School of Art. A former editor at i-D, The Face, Arena, the Observer and the Sunday Times, he is currently the Editor-In-Chief of GQ. He has won the British Society of Magazine Editors "Editor of the Year" award a record eleven times, and in 2013 was the recipient of the Mark Boxer Award. Under his editorship the magazine has won over 50 awards. He is the author of the Sunday Times best-seller David Bowie: A Life, and the New York Times best seller Jim Morrison: Dark Star. A trustee of the Hay Festival, in 2013 he was awarded an OBE for services to publishing.