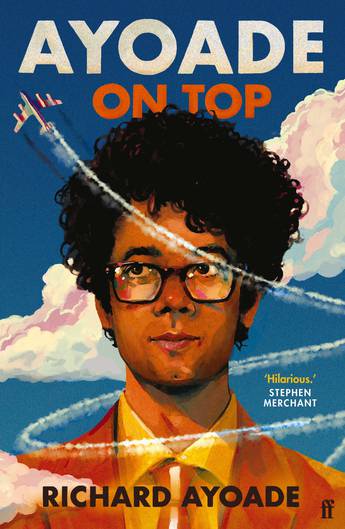 At last, the definitive book about possibly the best cabin crew dramedy ever filmed from one of the most 'insubstantial' people of our age.

At last, the definitive book about perhaps the best cabin crew dramedy ever filmed: View From the Top starring Gwyneth Paltrow.

In Ayoade on Top, Richard Ayoade, perhaps one of the most 'insubstantial' people of our age, takes us on a journey from Peckham to Paris by way of Nevada and other places we don't care about. It's a journey deep within, in a way that's respectful and non-invasive; a journey for which we will all pay a heavy price, even if you've waited for the smaller paperback edition.

Ayoade argues for the canonisation of this brutal masterpiece, a film that celebrates capitalism in all its victimless glory; one we might imagine Donald Trump himself half-watching on his private jet's gold-plated flat screen while his other puffy eye scans the cabin for fresh, young prey.
More books by this author

Richard Ayoade is a writer and director. In addition to directing and co-writing Garth Marenghi's Darkplace, he has adapted and directed Joe Dunthorne's novel Submarine for the screen, and is the co-writer (with Avi Korine) and director of the film, The Double.

As an actor he is best known for his roles as Dean Learner in Garth Marenghi's Darkplace and Maurice Moss in the Emmy Award-winning The IT Crowd, for which we was awarded a BAFTA as Best Performance in a Comedy.