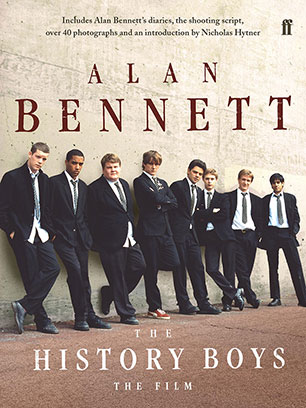 Includes Alan Bennett's diary, the shooting script, over 40 photographs and an introduction by Nicholas Hytner, director of the film.

An unruly bunch of bright, funny sixth-form boys in pursuit of sex, sport and a place at university. A maverick English teacher at odds with the young and shrewd supply teacher. A headmaster obsessed with results; a history teacher who thinks he's a fool. In Alan Bennett's screenplay, staff room rivalry and the anarchy of adolescence provoke insistent questions about history and how you teach it; about education and its purpose. Fox Searchlight Pictures, DNA and the BBC have joined forces to bring the National Theatre's award-winning production of The History Boys to the big screen, directed by Nicholas Hytner from a script adapted for the screen by Alan Bennett.
More books by this author

Alan Bennett first appeared on the stage in 1960 as one of the authors and performers of the revue 'Beyond the Fringe'. His stage plays include Forty Years On, Getting On, Habeas Corpus, The Old Country and The Lady in the Van, and he has written many television plays, notably A Day Out, Sunset Across the Bay, A Woman of No Importance and the series of monologues Talking Heads. An adaptation of his television play, An Englishman Abroad, was paired with A Question of Attribution in the double-bill Single Spies, first produced at the National Theatre in 1988. This was followed in 1990 by his adaptation of