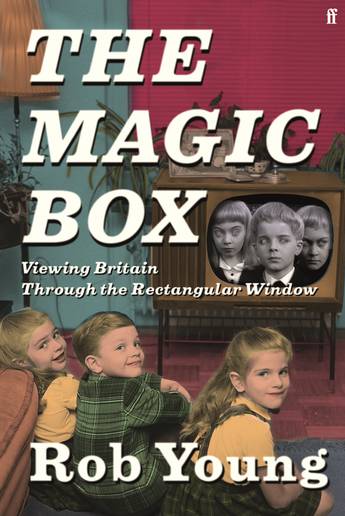 A riveting journey into the psyche of Britain through its golden age of television and film from the late 50s-late 80s. A cross-genre feast of moving pictures, from classics to occult hidden gems, The Magic Box is the nation's visual self-portrait in technicolour detail.

I found myself thinking more and more about how for the post-war generation, the television had replaced the village storyteller.

Growing up in the 1970s, Rob Young's main source of stories was the wooden box with the glass window in the corner of his grandparents' living room.

Before the age of DVDs and Blu-ray discs, YouTube and commercial streaming services, watching television was a vastly different experience. You switched on, you sat back, and you watched. There was no pause or fast forward button.

The cross-genre feast of moving pictures that were produced in Britain between the late 1950s and late 1980s - from The Village of the Damned, Bagpuss and Day of the Triffids to The Wicker Man, Worzel Gummidge and Brideshead Revisited - contributed to a national conversation and collective memory. It played out tensions between the past and the present, dramatised the fractures and injustices in society and acted as a portal for magical and occult notions. It expressed something about the nature and character of Britain, it's uncategorisable people and its buried histories. It became a golden age that influenced an entire generation of filmmakers and television producers.

In The Magic Box, Rob Young explores the strange and wonderful ways British identity has been portrayed on the screen, discovering a telemetric folklore of the British Isles.
More books by this author

Rob Young has worked at The Wire magazine since 1993, including five years as editor. He is the author of Electric Eden: Unearthing Britain's Visionary Music and All Gates Open: The Story of Can. He is the editor of Undercurrents: The Hidden Wiring of Modern Music and The Wire Primers: A Guide to Modern Music. His writing has appeared in Uncut, Guardian, Sight & Sound, Art Review and Frieze. He lives in Oslo with his family.