To Provide All People

A Poem in the Voice of the NHS 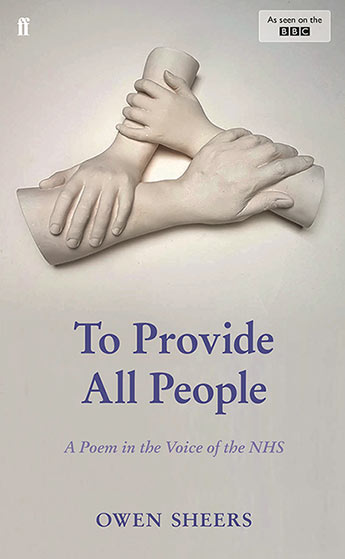 A film-poem by the author of Pink Mist and The Green Hollow to mark the 70th anniversary of the National Health Service Act's passage into law.

July 2018 marks the 70th anniversary of the National Health Service Act coming into effect. Owen Sheers, the author of Pink Mist and The Green Hollow, has created a virtuosic 'film-poem' to coincide with the broadcast on BBC Wales of his film with Pip Broughton.

To Provide All People is the intimate story of the N.H.S in British society today. Depicting the life of one hospital over the course of 24 hours, it charts an emotional and philosophical map of what defines the N.H.S against the personal experiences that lie at the heart of the service; from patients to surgeons, porters to midwives. This is a world of transformative pains, triumphs, losses and celebrations that joins us all in our universal experiences of health and sickness, birth and death, regardless of race, gender or wealth.

Based upon interviews, the work is punctuated with the historical narrative of the original journey of the N.H.S Act, from its origins in a local miners' scheme in Tredegar in Wales, through multiple hearings, amendments and battles with the press, the B.M.A and the Conservative party, to its coming into effect in July 1948.

To Provide All People is a work that excavates what the N.H.S. represents and means - on a personal and national level - and paints an authentic, tonal picture of a rare social phenomenon, illuminating with exquisite sensitivity and power why the ethos at its heart should be protected.
More books by this author

Owen Sheers is a poet, novelist and playwright. Twice winner of Wales Book of the Year, his books of poetry include Skirrid Hill, winner of a Somerset Maugham Award, and the verse drama Pink Mist, winner of the Hay Festival Poetry Medal and Wales Book of the Year. His first novel Resistance was translated into 15 languages and adapted into a film. His most recent novel, I Saw a Man was shortlisted for the Prix Femina Etranger. Owen's theatrical work includes The Two Worlds of Charlie F., winner of the Amnesty International Freedom of Expression Award, Mametz and National Theatre Wales's 72 hour The Passion. A former New York Public Library Cullman Fellow Owen was the recipient of the 2016 St David's Award for Culture and is currently chair of Wales PEN Cymru and Professor in Creativity at Swansea University. He lives in the Black Mountains of Wales with his wife and two daughters.