Who the Hell's In It? 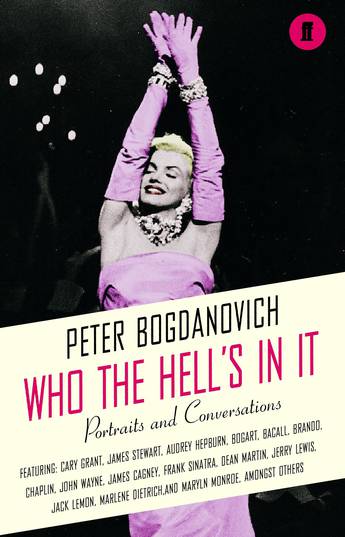 From Peter Bogdanovich - director, screenwriter, actor, and cinema scholar - 26 fascinating portraits of Hollywood's most acclaimed movie actors and actresses: stars whom he has known, admired, and occasionally worked with

Within these pages is Bogdanovich on Charlie Chaplin, Humphrey Bogart, Audrey Hepburn, James Cagney, John Wayne, Henry Fonda, Marlene Dietrich, Jack Lemmon, Boris Karloff, Dean Martin, Marilyn Monroe, James Stewart, Frank Sinatra, and many more. With an acute and affectionate eye, Bogdanovich shows us Lillian Gish, the first virginal hearth goddess of the silver screen; Marlon Brando, refusing to play the same from one picture to the next, yet ever recognisable as the great actor, in spite of himself; Jerry Lewis, whose goofy comedy represented the nine-year-old in all of us; and Cary Grant, the epitome of screen elegance, benignly aware that in life even he could never live up to his own legend. Bogdanovich captures brilliantly - in their own words and his - the personality, the work, the style and the enduring iconic appeal of America's movie greats.
More books by this author

Peter Bogdanovich's feature films as director include Targets, The Last Picture Show, What's Up Doc?, Paper Moon, Daisy Miller, Saint Jack and Mask. He has published books about Orson Welles, Howard Hawks and John Ford, as well as the interview collection Who the Devil Made It. His essays and reviews have appeared in the New York Times, Vogue, Esquire and the New York Observer. He lives in New York City.