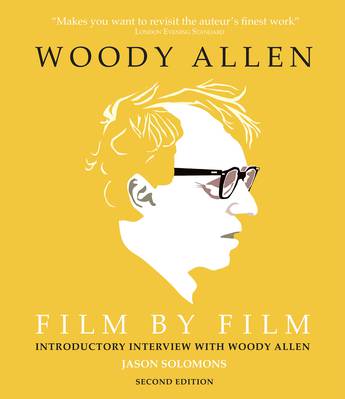 Download cover
The quintessential guide to Woody Allen's lifetime of work, Woody Allen: Film by Film examines each of Allen's movies, from when he vented his first neuroses in 1965 with What's New Pussycat, by way of Oscar winner Annie Hall, Hannah and Her Sisters, all the way to his latest works of Wonder Wheel and Cafe Society. Woody Allen has enjoyed a career unlike any other writer or director in Hollywood. The impact of his comedy and his psychoanalysis of the modern world have been hugely influential and had a profound effect on popular culture ever since. Filled with key images of his films, as well as lots of behind-the-scenes content.

As Woody said about himself: 'The two biggest myths about me are that I'm an intellectual, because I wear these glasses, and that I'm an artist because my films lose money.' As self-critical as ever - and with a hotly tipped Oscar material new film scheduled for the end of 2017 - Woody Allen remains a force to be reckoned with.
More books by this author

Jason Solomons is a film journalist and writer. He has a weekly column in The Observer and The Mail On Sunday newspapers and is a regular guest on BBC News, Sky News, and BBC radio. In 2013 he presented Annie Hall as part of "The Film That Changed My Life" season at London's Barbican Arts Centre. He also has a regular movie show on Sky Arts channel, which has featured in-depth interviews with, among others, Tim Roth, Gael Garcia Bernal, and Richard Gere. In his role as a journalist and writer, he has interviewed Martin Scorsese, Nicole Kidman, Danny Boyle, Catherine Deneuve, the Coen Brothers, Spike Lee, and, of course, Woody Allen.