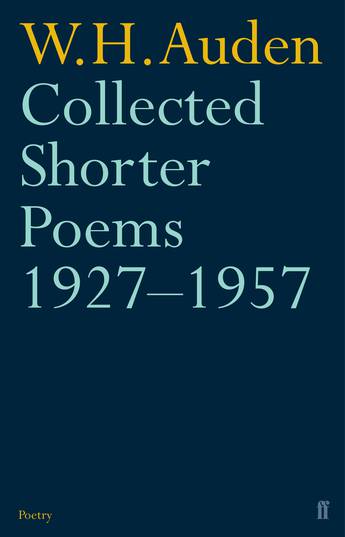 Download cover
W. H. Auden was once described as the Picasso of modern poetry - a tribute to his ceaseless experimentation with form and subject matter. Beginning with Anglo-Saxon poetry and ending with an Horatian expansiveness and conversational sweep, this volume is essential reading for anyone seriously interested in modern poetry after T. S. Eliot.

In his lifetime a controversial, outspoken, yet enigmatic, writer, Auden has gradually come to seem an intimate poet, as we have learned to read him correctly. This volume is the best possible introduction to his consummate craftsmanship and his unparalleled originality, an originality which made him the master-poet of his generation.

W. H. Auden was born in York in 1907, and brought up in Birmingham. He went to Christ Church College, Oxford, where Stephen Spender privately printed a booklet of his poems. After university he lived for a time in Berlin, before returning to England to teach. His first book, Poems, was published by T. S. Eliot at Faber in 1930. Other volumes of poems and plays followed during the 1930s. He went to Spain during the civil war, to Iceland (with Louis MacNeice) and later travelled to China. In 1939 he and Christopher Isherwood left for America, where Auden spent the next fifteen years lecturing, reviewing, writing poetry and opera librettos, and editing anthologies. He became an American citizen in 1946, and was awarded the Pulitzer Prize in 1948. In 1956 he was elected Professor of Poetry at Oxford, and a year later went to live in Kirchstetten in Austria, after spending several summers on Ischia. He died in Vienna in 1973.