One Lark, One Horse 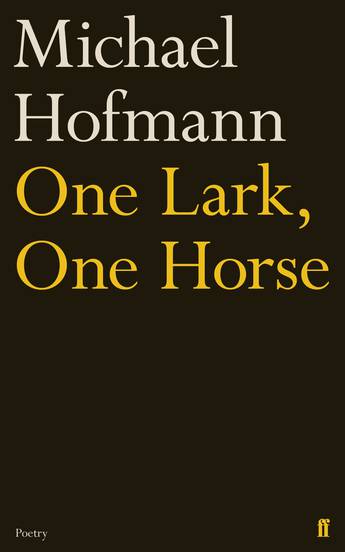 The first new collection of poems in nearly twenty years from German-born poet, essayist and translator - now in paperback.

Michael Hofmann is renowned as one of our most brilliant critics and translators; that he is also regarded as among our most respected poets - 'one of the definitive bodies of work of the last half-century', TLS - is all the more impressive for his relatively concentrated output. One Lark, One Horse will be his fifth collection of poems since his debut in 1983, and his first since Approximately Nowhere in 1999. But it is also one of the most anticipated gatherings of new work in years. In style, it is as unmistakable as ever: sometimes funny, sometimes caustic; world-facing and yet intimate; and shows a bright mind burning fiercely over the European imagination. Approaching his sixtieth birthday, the poet explores where he finds himself, geographically and in life, treating with wit and compassion such universal themes as ageing and memory, place, and the difficulty for the individual to exist at all in an ever bigger and more bestial world.

One Lark, One Horse is a remarkable assembly of work that will delight loyal readers and enchant new ones with its approachable, companionable voice.
More books by this author

Michael Hofmann was born in 1957 in Freiburg, Germany, came to England in 1961, and has taught for the past 25 years at the University of Florida. He has published four volumes of poems and a Selected Poems (2008). Awards for poetry include a Cholmondeley Award and the Geoffrey Faber Memorial Prize; those for his translations include the Independent's Foreign Fiction Award, the IMPAC Dublin Literary Award and the P.E.N./Book-of-the-Month Club Translation Prize.

Ashes for Breakfast - his translations of Durs Grunbein - appeared in 2005, and Impromptus - his translations of Gottfried Benn - in 2012. His reviews and criticism are gathered in Behind the Lines (2001) and Where Have You Been? (2014). Hofmann edited the Faber Book of 20th Century German Poems, and has made personal selections from the work of Robert Lowell and John Berryman.