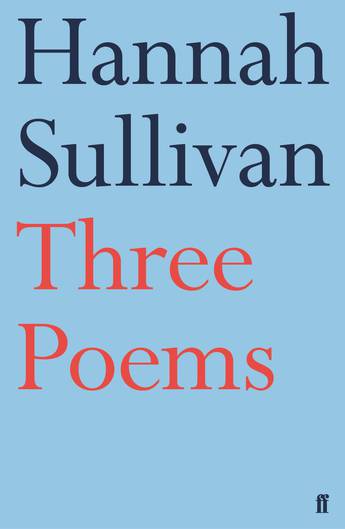 Hannah Sullivan's debut collection is a revelation - three long poems of fresh ambition, intensity and substance. Though each poem stands apart, their inventive and looping encounters make for a compelling unity. 'You, Very Young in New York' captures a great American city, in all its alluring detail. It is a wry and tender study of romantic possibility, disappointment, and the obduracy of innocence. 'Repeat until Time' begins with a move to California and unfolds into an essay on repetition and returning home, at once personal and philosophical. 'The Sandpit after Rain' explores the birth of a child and the loss of a father with exacting clarity.

In Three Poems, readers will experience Sullivan's work with the same exhilaration as they might the great modernising poems of Eliot and Pound, but with the unique perspective of a brilliant new female voice.
More books by this author

Hannah Sullivan is an Associate Professor and Tutorial Fellow in English at New College, Oxford. She received her PhD in English and American Literature from Harvard in 2008 and was an Assistant Professor in the English department at Stanford University. The Work of Revision (Harvard, 2013) was awarded the 2014 Rose Mary Crawshay Prize by the British Academy, and the 2015 University English Prize for a first book. She lives in London with her husband and two sons.