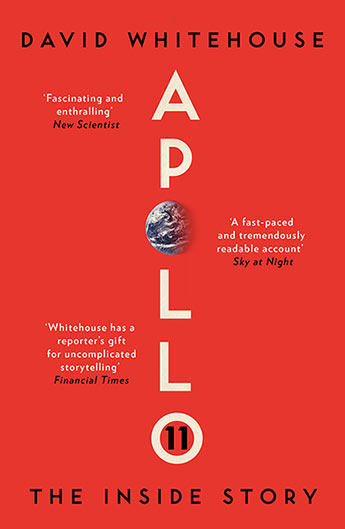 Fifty years ago, in July 1969, Apollo 11 became the first manned mission to land on the Moon, and Neil Armstrong the first man to step on to its surface. He and his crewmates, Buzz Aldrin and Michael Collins, were the latest men to risk their lives in this extraordinary scientific, engineering and human venture that would come to define the era.

In Apollo 11: The Inside Story, David Whitehouse reveals the true drama behind the mission, putting it in the context of the wider space race and telling the story in the words of those who took part - based around exclusive interviews with the key players.

This enthralling book takes us from the early rocket pioneers to the shock America received from the Soviets' launch of the first satellite, Sputnik; from the race to put the first person into space to the iconic Apollo 11 landing and beyond, to the agonising drama of the Apollo 13 disaster and the eventual winding-up of the Apollo program.

Here is the story as told by the crew of Apollo 11 and the many others who shared in their monumental endeavour. Astronauts, engineers, politicians, NASA officials, Soviet rivals - all tell their own story of a great moment of human achievement.
More books by this author

David Whitehouse is a former BBC Science Correspondent and BBC Science Editor. He is the author of five books including The Sun: A Biography and Journey to the Centre of the Earth, and has written for many newspapers and magazines including
The Times, The Guardian, Focus, New Scientist and The Economist. He also appears on many TV and radio programmes. Asteroid 4036 Whitehouse is named after him. www.davidwhitehouse.com