Atoms, genes and the politics of Australia's deep past 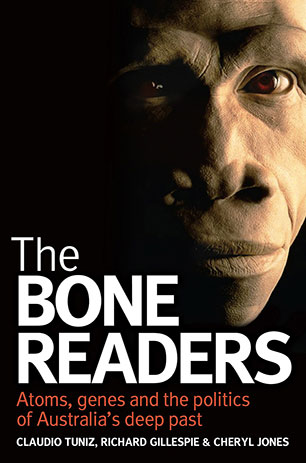 Eminent scientists set the record straight for readers puzzled by the myriad of claims and counterclaims about Australia's prehistory, arguing that many popular theories are based on misinterpretation or outright distortion of scientific evidence.

Who owns the past? How do you read ancient bones? And what do artefacts, pollen and genes from the ice ages tell us about our origins?

Using ever more refined techniques, scientists can now describe ancient landscapes and the early humans and animals once inhabiting them. The Bone Readers examines the facts and myths about the first human arrival in Australia and its region; what modern DNA tells us about the origin of Australian Aborigines; theories on the Indonesian hobbits'; and who or what killed off Australia's giant marsupials. The findings from Australia and its neighbours are echoed in debates over the mysterious demise of the Neanderthals and shed light on human evolution.

But, as ever, the scientists are divided. The Bone Readers exposes a hidden world of colourful characters and passionate debate and some truly weird ideas.

This book sets the record straight for anyone puzzled by the myriad claims and counterclaims about who did what, when and to whom in Australia's deep past and explains the science behind the latest techniques in an accessible way. Not shy of controversy, The Bone Readers is bound to stir debate.

This excellent book not only clearly presents the science behind research on human origins, but also the personalities and the politics.'

PROFESSOR CLAUDIO TUNIZ is a world-renowned expert in geochronology using particle accelerators. He is Assistant Director of UNESCO's International Centre for Theoretical Physics in Trieste, Italy, where he promotes the use of atomic and nuclear physics in palaeoanthropology. He was director of the accelerator dating centre at the Australian Nuclear Science and Technology Organisation and has published widely on Australian prehistory. RICHARD GILLESPIE built a radiocarbon laboratory at Sydney University before taking up research positions at the University of Oxford, the University of Arizona and the Australian National University. He is an authority on dating bones and shells, with wide fieldwork experience in Africa, North America and Australia.CHERYL JONES is a science journalist who for many years has covered developments in Australian prehistory for leading science journals, along with international and Australian media, including The Australian Financial Review, The Canberra Times, The Bulletin and The Australian. She has a BSc in chemistry from the University of NSW.

10 Blast from the past