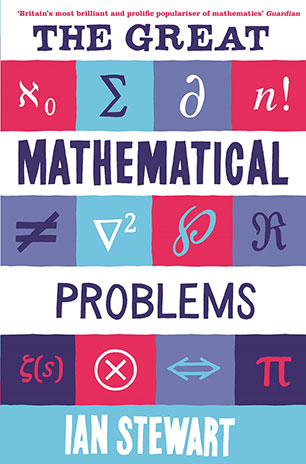 'Britian's foremost populariser of maths' Ian Stewart reveals the ultimate questions that take us to the limits of mathematics - now available in paperback.

There are some mathematical problems whose significance goes beyond the ordinary - like Fermat's Last Theorem or Goldbach's Conjecture -they are the enigmas which define mathematics.

The Great Mathematical Problems explains why these problems exist, why they matter, what drives mathematicians to incredible lengths to solve them and where they stand in the context of mathematics and science as a whole. It contains solved problems - like the Poincare Conjecture, cracked by the eccentric genius Grigori Perelman, who refused academic honours and a million-dollar prize for his work, and ones which, like the Riemann Hypothesis, remain baffling after centuries.

Stewart is the guide to this mysterious and exciting world, showing how modern mathematicians constantly rise to the challenges set by their predecessors, as the great mathematical problems of the past succumb to the new techniques and ideas of the present.
More books by this author

Ian Stewart is Mathematics Professor Emeritus at Warwick University. His many books include Mathematics of Life [9781846682056], Professor Stewart's Cabinet of Mathematical Curiosities [9781846683459], and The Science of Discworld trilogy with Terry Pratchett. He is a Fellow of the Royal Society, appears frequently on radio and television, and does research on pattern formation and network dynamics.