Westerners in search of wisdom 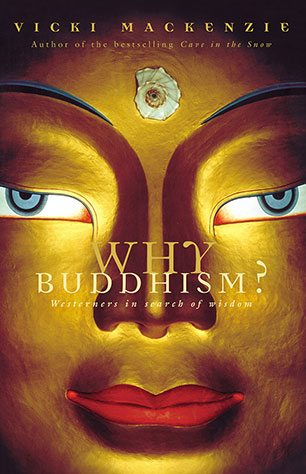 A series of in-depth accounts exploring the lives and spiritual journeys of fifteen western Buddhists - from the famous to the ordinary.

Why Buddhism? is a series of interviews through which Vicki McKenzie (author of Cave in the Snow) explores the reason for Buddhism's growing appeal in western society.

Through personal examples, this book will reveal what Buddhism means to a wide range of people in the UK, Australia and US. The interviews are inspiring and informative, covering the process each person went through in becoming involved in Buddhism, as well as the effect it has had on their lives and any difficulties they've encountered.

The subjects interviewed in Why Buddhism? range from the famous, like composer Phillip Glass, actor Tracy Mann, and author/teacher Robert Thurman, to the heroic, such as the nun who brings Buddhist teachings to hardened criminals in jail, the extraordinary - like the Buddhist diamond merchant, and the ordinary made remarkable - like the woman Queensland woman dying a good Buddhist death.

Popular rather than scholarly in tone, Why Buddhism? should appeal to those of us who are keen to know more about a religion that is much talked about but little understood.
More books by this author

Vicki Mackenzie is a journalist with broad professional experience in Britain and Australia. She has studied Tibetan Buddhism for twenty years and has published widely on the subject, including Reincarnation: the Boy Lama, Reborn in the West, and A Cave in the Snow.

Being in the gateway; Inta McKimm, Buddhist with terminal illness

Practice on the path to paradise; Thubten Gelek, Itinerant monk

Recording the past; Philip Glass, Composer

The cultivation of mindfulness; Sharon Salzberg, Teacher of a way of seeing

Life as a question, not as a fact; Stephen Batchelor, Translator, former monk