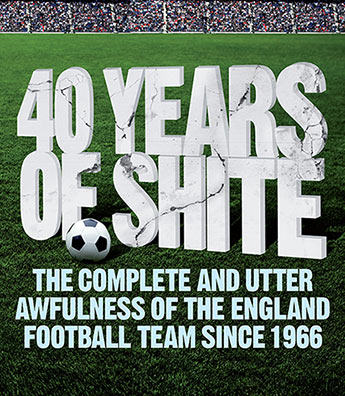 Download cover
Availability: Not available to order from this website, please try another retailer
Packed with stats and punditry, and lavishly illustrated, 40 Years of Shite profiles every England squad to have taken part in every major tournament since the 1966 glory days. It lists each player to have worn the three lions for England and the managers who took charge of our World Cup and European Championship teams.

For every Lineker, Hoddle and Rooney, it reminds us of those players whose inclusion (or exclusion) in the squad baffled everyone. It reveals 'The People's Managers' (men like Clough or Shankly who, despite their achievements, were never offered the job), names our one-cap wonders and our deadliest opponents, and proposes the all-time England dream team (capable of winning every World Cup, every time). And along the way it takes in some spectacularly dodgy haircuts and distinctly short shorts.

Three cheers for 40 Years of Shite, a must-have book for England fans everywhere.