The legend of the controversial Tour de France champion 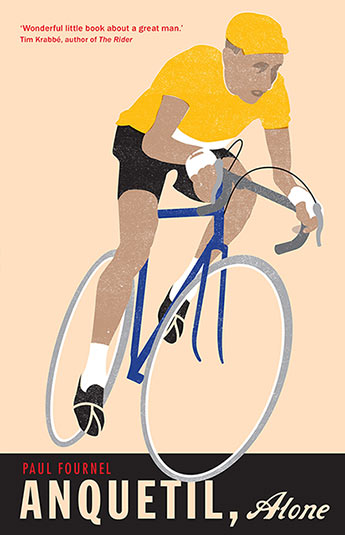 The legend of Jacques Anquetil, controversial French cycling star of the 60s, told through the eyes of novelist and childhood Anquetil fan Paul Fournel.

There are things he does alone, and things that he alone does.

Jacques Anquetil was a cyclist with an aristocratic demeanor and a relaxed attitude to rules and morals. His womanising and frank admissions of doping appalled 1960s French society, even as his five Tour de France wins enthralled it.

Paul Fournel was besotted with him from the start ('Too young to understand, I was nevertheless old enough to admire') and followed Anquetil's career with the passion of a fan and the eye of a poet.

In this stunningly original biography of a complex and divisive character, Fournel - author of the seminal Velo (or Need for the Bike)- blends the story of Anquetil's life with scenes from his own, to create a classic of cycling literature.
More books by this author

Paul Fournel is a French writer, poet, publisher and cultural ambassador. He was awarded the Prix Goncourt for short fiction for Les Athletes dans leur tete. His Besoin de Velo (translated into English as Need for the Bike and Velo) is a classic cycling text, in which he describes himself as the Proust of the chute. Anquetil, Alone is translated by Nick Caistor.