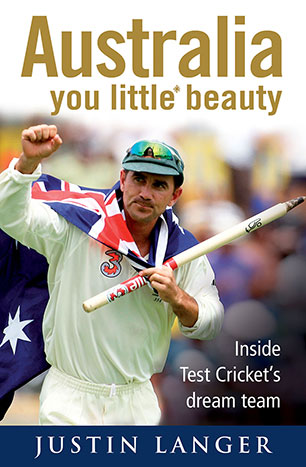 Justin Langer, one of Australia's highest ever run scorers, looks back at his life in cricket - on the mateship, change room antics and onfield triumphs which made up his 105-Test innings as a member of one of the game's greatest teams.

Justin Langer scored more centuries than Ian Chappell, Doug Walters or Bill Lawry and had a better average than Mark Taylor, David Boon or Mark Waugh yet lived almost every moment of his glittering Test career as if it was his last.

In this intimate and at times poignant account, Langer looks back on the mateship, change room antics and onfield triumphs which made up his 105-Test innings as a member of one of the game's greatest teams. Peer behind the scenes to relive the night they soaked the English change rooms at Lords in beer, the midnight frolic around the SCG in their underpants and baggy green caps and the Caribbean dinner which cost the ACB $16,000.

What was it like to face the barrage of the West Indies and Pakistan attacks at their peak, who was the best bowler he ever faced and why did an Adelaide pool table help Shane Warne hone his flipper. It's a journey from the world's great cricket grounds to the poorest areas of the sub-continent, Africa and the West Indies, and the luxuries of a feted sporting champion to the day Matthew Hayden arrived in India with a gas stove in his cricket bag.

Learn how meditation and martial arts helped him battle his chronic fear of failure and read first-hand snippets from childhood sweetheart Sue Langer who shines a unique light on life as a cricketer's wife.
More books by this author

Justin Langer played 105 Test matches for Australia between 1993 and 2007, scoring 7696 runs and 23 centuries. He was a key player in great Australian teams captained by Steve Waugh and Ricky Ponting, and with Matthew Hayden formed arguably the most successful opening partnership in Australian Test history. In 2001, he was named one of Wisden's Cricketers of the Year. Justin is also the author of From Outback to Outfield, The Power of Passion and Seeing the Sunrise, and is patron of several charities, including the Children's Leukaemia and Cancer Research in Western Australia.