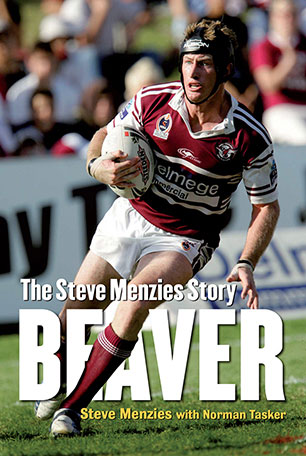 When Steve ('Beaver') Menzies retires at the end of the 2008 League season, he may well need to have a National Trust preservation order placed on him. We may never see his like again. ;;He has never played for any other first-grade club than his beloved Manly Sea Eagles. As a clean-living, clean-playing second-rower he's a legend (his partner is currently pregnant with their first child). He's

Steve Menzies has played more games at the top level of Australian rugby league, and scored more tries, than any other forward in history. He is second on the all-time appearance list, within striking distance of the record. Through 16 years at the coalface he has been an exemplary performer; talented and committed on the field, respectful and respected off it.

This book tells the story not just of Steve The Beaver' Menzies, but of the tumultuous period in the game that has seen enormous change. When Beaver started as a teenager back in 1993, it was a simpler game with a more relaxed culture. With the arrival of Super League, big money, suffocating media scrutiny and diminishing club loyalty, rugby league became in many ways a different game altogether.

This book paints the story of Steve Menzies' journey through that change. Of his adaptability and his loyalty to one club. Team mates from Hasler and Toovey to Orofrd and Kennedy, opponents from Fittler and Clyde to Johns and Lockyer. The Beaver' has played with and against the best over two decades. And his partnership with mercurial Cliffy Lyons was legendary.

This is a story of not just matches won and lost, but a picture of the future of a game that has occupied all of Menzies' adult life.
More books by this author

Norman Tasker is a 40-year veteran of the sports writing craft. He covered his first rugby Test for the Sunday Telegraph at 19 years of age, made many major tours as travelling correspondent with Australian cricket and rugby teams, and became sports editor of the former Sydney afternoon paper The Sun . Tasker moved into the magazine field as a long-term editor of Rugby League Week , launched the cricket magazine Inside Edge and its rugby counterpart Inside Rugby , and became publisher of ACP's sporting magazine division.