It Takes All Sorts 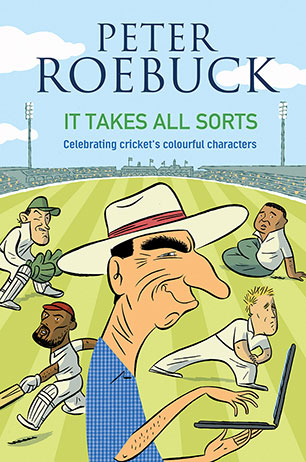 A personal selection of Peter Roebuck's favourite cricket characters past and present, written in his own inimitable style and from his vantage point as both player and commentator.

In It Takes All Sorts, Peter Roebuck meanders through his 25-year career in reporting cricket, to reveal the people and the personalities who have touched his life and contributed to his life-long passion for the game.

Roebuck provides warts-and-all insights into the comings and goings, greats and not-so-greats, debuts and retirements, the controversies of recent professional cricket and great innings in between. Roebuck has seen it all and isn't afraid to comment: he's interviewed Sir (or is that Saint?) Garfield Sobers' mum, was on the scene (and on the front page) when Gilchrist walked, poked gentle fun at Inzamam's fielding, and touched many with his account of young Sri Lankan boys playing cricket on a beach in Galle.

Peter Roebuck pulls no punches - whether friend or foe, all his subjects are linked by the great and noble game of cricket and he is not afraid to tell it how he sees it.
More books by this author

Peter Roebuck graduated in Law from Cambridge University, and played for Somerset as an opening batsman for some fifteen years, the last few as captain. In the late seventies he started spending the off season in Australia, first of all as a teacher at Cranbrook and then as a fulltime journalist and commentator.

Best known to Australian cricket fans as the incisive and sometimes controversial, cricketing voice of the Sydney Morning Herald and ABC radio, Peter Roebuck's career has spanned 25 of the most exhilarating years of world cricket.

Chapter 2 Champions and their deeds

Chapter 5 To be an Englishman

Chapter 7 From the Caribbean

Chapter 9 From the Dark Continent

Chapter 10 Salt of the earth