Legends of the Baggy Green 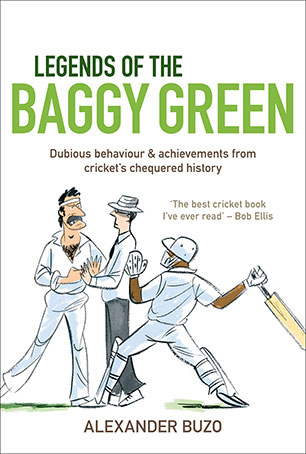 New cover edition of Alex Buzo's commentary on cricket manners and mores, charting the rise of the game from disreputable gambling origins in the 19th century to its current status as a first-class game of the 21st century.

Full of brigands and bogans, legends and sledgends, Legends of the Baggy Green is an acerbic commentary on the codes and manners of cricket behaviour. Part social history, part blooper tape, this book takes sports comedy back to where it all began.

The sins of modern cricket-sledging, chucking, match-fixing, plus the heinous practice of putting the ball in the freezer to make it bounce higher - are all here, along with a rogues' gallery that includes everyone from 'Horseshoe' Herby Collins to Salim 'The Rat' Malik.

From the watermelon presented to Syd Gregory to the brown paper bag full of cash that was given to the late Hansie Cronje, there is full disclosure in Legends of the Baggy Green, as well as comment on the commentators who have observed cricket's transit from Lord's to Hollywood, and from the Gabbatoir to the Elysian, desalinated fields of Sharjah.

The outburst by 'Oo-ah' Glenn McGrath in the West Indies in 2003 put cricket behaviour on front pages all over the world. As is usual with McGrath, women sighed, men admired and boofheads fumed, but what was really going on? What the hell has happened to the game we loved and respected?

There is ample scope for both humour and criticism here, and playwright, satirist and genuine cricket 'tragic' Alex Buzo has sharpened his pen to provide plenty of both.
More books by this author

Alex Buzo was one of Australia's best known playwrights, and had several books to his name. A regular occasional columnist on sporting topics, he also edited cricket and sporting anthologies. Alex Buzo died in 2006.