More Important than Life or Death

Inside the Best of Australian Sport 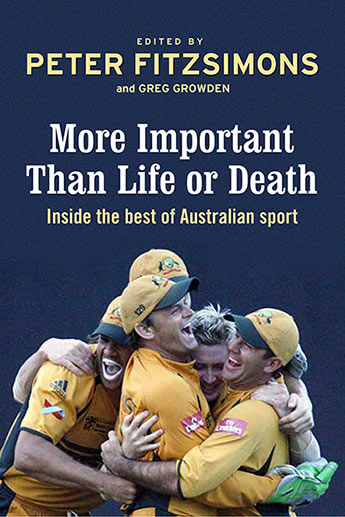 For years journalists have been eyewitnesses to athletes - from the elite to downtrodden - chasing, achieving or falling short of their dreams. They have observed, chronicled and attempted to find the secrets to winning and losing. For some, sport may be a meaningless diversion. For most, it is life's most important punctuation mark. In this book the formidable Fairfax stable of fine writing thoroughbreds explains why.

On the journey to find the reasons why sport is a religion, an obsession to so many, there's revelations, hilarity, triumphs, sadness, excitement, pathos, tribulation, controversy, moments of sheer stupidity and episodes of bravery. Most importantly like sport itself, this collection is always entertaining.
More books by this author

Peter FitzSimons is a journalist with the Sydney Morning Herald and Sun-Herald and a former national representative rugby union player who is passionate about sport and sportswriting. He is also a regular TV commentator, a former radio presenter (with Mike Carlton on Radio 2UE) and a best-selling author of nearly twenty books. These included Tobruk, Kokoda, Batavia, and biographies of Nancy Wake, Kim Beazley, Nene King, Sir Douglas Mawson, Nick Farr-Jones, Steve Waugh and John Eales.

Greg Growden worked for the Sydney Morning Herald for 34 years, and was chief rugby correspondent between 1987-2012, covering hundreds of Test matches around the world. During this time he also wrote about a multitude of sports including rugby league, cricket, AFL, and even once had the main race at a Wentworth Park greyhound meeting named after him. He is now a rugby expert for ESPN and scrum.com. He has written 11 books, including A Wayward Genius, which was described by The Guardian's Frank Keating as among the 100 best sporting books of the twentieth century.