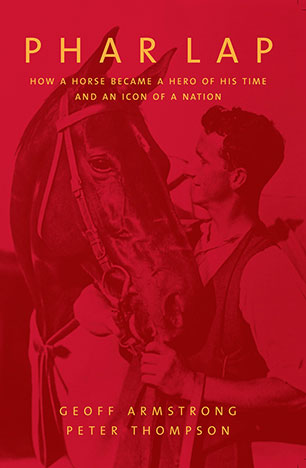 The thrilling, mysterious and tragic story of how a horse became a hero of his time and an icon of a nation.

In 1929, Phar Lap was a gangly gelding born and bought cheaply in New Zealand, rejected by his American owner and trained by an Aussie battler who could hardly feed his family yet agreed to feed the horse. His best mate was Tommy Woodcock, a young horseman who himself became a racing folk hero. Today, a strong case can be put that Phar Lap was the best there ever was

certainly, there has never been a champion who so consistently and clinically made hacks of all his rivals.

First released as an illustrated hardback, this is the most complete account of Phar Lap's life every published. It explores the many mysteries of his career, including the infamous shooting that occurred just days before his great triumph in the 1930 Melbourne Cup. It brings to life the characters of the racetrack and provides the definitive analysis of his previously unexplained death in North America. Most of all, it explains why Phar Lap is so much more than simply a racehorse.
More books by this author

Geoff Armstrong has been involved in sports writing as author, editor, publisher and researcher for over a decade. He wrote the official centenary book of the Sheffield Shield A Century of Summers and he compiled and edited the rugby league anthology The Greatest Game. He is co-author with Mark Gately of the first history of Australia in international one-day cricket and together with Mike Whitney he wrote Whiticisms. Geoff also worked with Australian cricket captain Steve Waugh on all seven of Waugh's best-selling books.

Peter Thompson's fascination with racing began when his grandmother backed Piping Lane at 40-1 to win the 1972 Melbourne Cup. As a commentator on sporting issues, his opinions have been read in the Age, The Financial Review and BRW and heard as that of 'Thommo from the Track' on Melbourne Radio's 3AW. As an owner of several slow horses, he has often been heard to invoke the chant of the hopelessly optimistic: 'Even Phar Lap ran last