Inside the Dream Tour and Mick Fanning's 2007 championship win 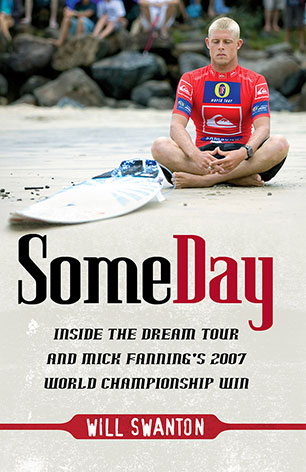 Some Day takes you deep inside the 2007 World Surfing Tour for the real story on how Australian Mick Fanning took down the greatest surfer in history, Kelly Slater, for his first world title.

Sometimes, when a man embarks on a mission, he can become impossible to stop.

It's the Dream Tour: the race for the world surfing championship. It's cut-throat. It's personal. It's The Big Five Kelly Slater, Mick Fanning, Taj Burrow, Joel Parkinson and Andy Irons attacking each other like wild dogs. Some Day goes behind the roped-off areas to reveal all the bonds, rifts, triumphs and controversies as the hottest field in tour history chases the world championship. Exclusive interviews. Eyewitness accounts. Jaw-dropping pictures by the ASP's official photographers from the most spectacular surfing locations on the planet in Australia, Tahiti, Chile, South Africa, the United States, France, Spain and Brazil. Everywhere from the spiritual homes of Jeffreys Bay and Bells Beach to the killing field of Teahupo'o. Will Swanton is on Kelly Slater's shoulder at Trestles. He's on the stage with Taj Burrow at Bells. He's on the cliffs of Mundaka with Mark Occhilupo. He's on the sand with Mick Fanning when all hell breaks loose in Brazil after the most nerve-racking year of Fanning's life. Never before has a book gone so far inside pro surfing. Never before has the world title race been covered in such microscopic detail. This is as close as you can get without pulling on a contest singlet yourself.
More books by this author

Will Swanton has been a sports writer for a decade. He's covered the Australian Test cricket tours to England, India and the West Indies, plus the 2003 World Cup in South Africa. From swimming at the Olympic and Commonwealth Games, the Australian Open Golf tournament, Davis Cup tennis to State of Origin and Test rugby league, Will's seen Ian Thorpe win Olympic gold, Steve Waugh score test centuries and Andrew Johns win rugby league premierships. But after five years following the World Surfing Tour, he's never seen anything like the Dream Tour.