The extraordinary two decades when Australians ruled the tennis world 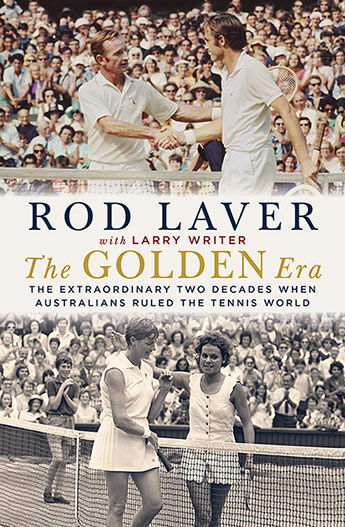 From the 1950s to the 1970s, Australia was the world's tennis superpower, producing players who dominated amateur grand slam tournaments, the Davis Cup and the professional circuit, and none was more successful, famous or influential than Rod Laver, whose two singles Grand Slams - winning the Australian, French, Wimbledon and United States championships in a calendar year - have never been equalled.

The Golden Era is Rod's deeply personal account of those great years. As a participant and eye-witness, he captures the excitement and drama of the great wins, and gives us genuine insight into the band of supremely talented Australian champions who balanced playing hard with a legendary sportsmanship. Written with all of Rod's peerless tennis knowledge, and including key interviews with Frank Sedgman, Ken Rosewall, the late Lew Hoad, Neale Fraser, Mal Anderson, Ashley Cooper, Roy Emerson, Fred Stolle, John Newcombe and Margaret Court, The Golden Era is the definitive story of the two decades of Australian tennis domination that will almost certainly never be repeated.
More books by this author

Rod Laver AC, MBE was born in Rockhampton, Queensland, in 1938. He ranks as one of the greatest tennis players of all time, if not the greatest. A key member of the golden era of Australian tennis in the 1950s, 60s and early 70s, he won three Australian, two French, four Wimbledon and two United States singles titles. He played in five winning Davis Cup campaigns. All this despite being banned from amateur tennis while playing on the professional circuit from 1963 to '68. Rod is the only player to achieve two Grand Slams, in the 1962 and 1969 calendar years. In 2000, the main arena at Melbourne Park, home of the Australian Open, was named Rod Laver Arena, and in 2017 the Laver Cup was inaugurated in his honour. As a player, Rod exemplified all that is good about the sport of tennis, and continues to do so as a revered elder statesman of the game and inspiration to new generations of champions.

Larry Writer is the author of the Ned Kelly Award-winning Razor: Tilly Devine, Kate Leigh and the Razor Gangs; the William Hill Prize shortlisted Dangerous Games: Australia at the 1936 Nazi Olympics; Pitched Battle: In the Frontline of the 1971 Springbok Tour of Australia; Bumper: The Life and Times of Frank 'Bumper' Farrell; and Never Before, Never Again: The Story of St George's 11 Straight Rugby League Premierships, 1956-66. He has also collaborated with tennis legends Rod Laver, John Newcombe and Margaret Court, and rock star Chrissy Amphlett, on their memoirs.