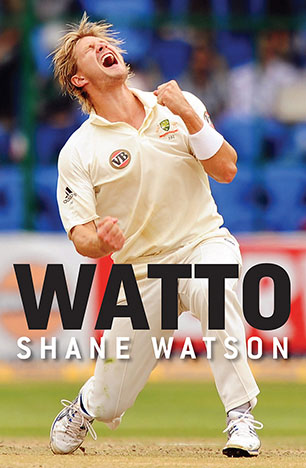 The incredibly forthright autobiography from Australia's most consistent cricketer, and recently anointed new vice captain, is a compelling, inspiring and surprising account of his journey from great potential to deep despair and then personal triumph.

'There's nothing more we can do for you. Maybe it's time you gave up bowling. Concentrate on your batting.' September 2007

For Shane Watson, this was a body blow, even more devastating than the injuries that had stalled his promising career. It felt like the end of his boyhood dreams of being Australia's number one all-rounder. He was shattered. He might never wear the Baggy Green again, even as a batsman. With so many talented young players available, he was losing the weapon that made him stand out from the crowd.

Back in February 2002, at the age of 20, Shane had been on a plane bound for South Africa with all his idols-the Waugh brothers, Glenn McGrath and Shane Warne. He was only among the reserve players, but was already being hailed as the best up-and-coming all-rounder in the country. Yet in the next four years he sustained so many injuries so frequently that almost everybody lost faith in him. But, even through the darkest of days, he never lost belief in himself.

Fast forward to March 2011. Shane is vice captain of the Australian Test and One-Day teams, and has become an opening batsman of prodigious talent, a reflexive catcher at first slip and a bowler who rarely fails to take wickets. To many observers, he has become his nation's most valuable player and surely the first name on the team sheet in all forms of the game. Here is his compelling and inspiring account of his journey from great potential to deep despair and then personal triumph.
More books by this author

Shane Robert Watson (born 17 June 1981 in Ipswich, Queensland) is an Australian cricketer. He is a right-handed batsman and a right-handed fast medium bowler. He debuted for the Australian cricket team in 2002, playing his first one-day international against South Africa. He now opens the batting for Australia in all forms of cricket and was made vice-captain of both the Test and One-day teams in March, 2011. After an appalling run of injuries his spectacular and consistent form with the bat has seen him mature as a player to the point that he is after the captain doubtless the first player selected.